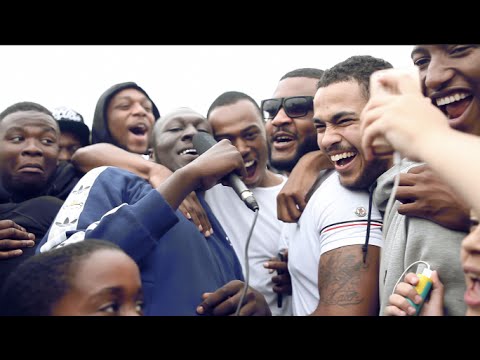 Wait two secs, let me spark this zoot
My niggas, they don't tark, they shoot
Roll up slow, then I park that coupe

And the game got fucked by the darkskin yout
Oh well, should've been watching
He was gone by the time that they clocked him
#MERKY, #SKENGMAN
What's the last one? Yeah, #PROBLEM
They should've stopped him, I don't run out of bars
Just like Chip, I don't run out of bars
Walk in the rave , put the glass to your face
Look, I make fuckboys run out of bars
Big 45 might bun out your clart
No safety, that might dun out your dance
Knock on your door like oi rudeboy, look
Forget the hype, just come out the yard
See the lightskin girls used to cuss me
Now the lightskin girls, they love me
Word to J Hus, man are ugly
But this rap ting's sick, man, trust me
Nobody can't claim that they buss me
Cuh man was out there on a fuckery
Plus we don't even tark too much
That's the reason why your girl wanna fuck me
I don't really care about your friend
Bare likkle fish never been on the ends
Yeah, you go hard but we go harder
You shut down but nigga, I leng
You turn up but nigga, I rep
Why do man love getting me vexed?
Here for the lightskin girl with the big bumper
And the black bredrin with the breasts

Everyting blessed, what's your name?
Where you from? Roll up, grab your girl, then I'm gone
Why do they wanna know what I'm on?
Get one chance, one chance and it's gone
Man go down, put amm in a bong
This go down on the man at the front
Nigga, stay there, stop tagging along

If you got a BET, bring it out
Oh, you don't? Shut your mouth
Man just chat shit, ack up the mout
Know where I come from, I'm from the south
Duck up my house, peak when I press play
Niggas go gym but they're missing out leg day
My worst days are some of your best days
Punch a grime MC off his segway, pussyhole
Don't make me slap you
Look, like, wait till I catch you
Look, man are like "that's that black yout"
Went Jools Holland in my tracksuit
Rep for the scene like yeah man, I had to
Just run a sick beat I can rap to
Everybody calm down, it's a tracksuit
What the fuck, man? I ain't gonna stab you
Look, I don't wanna argue
But if you talk shit, man'll par you
Look at the size of my fist, I will spark you
I'm the grime scene's Lukaku
6'5" black guy, mad fly, put me up top
Man down, everybody down when I buss shots
Jump onstage, bare rage when my dub drop
You did grime for a sec, then you fucked off
Rap boys hate me cuh I do grime
Grime boys hate me cuh I do rap
Good youts hate me cuh I'm too cruddy
Bad youts hate me cuh I don't trap
Fake youts hate me cuh I'm too real
And the real youts hate me cuh I don't act
Well, um...
Suck your mum, yeah, go and do that
My name's Michael, Big Stormz
I like peng tings, I like porn
I've got a 16 bar full of corn
I breathe fire every time I yawn
Stormzy's this, Stormzy's that
Stormzy's blick, Stormzy's black
Stormzy's hairline's going way back
But I still fuck your girl, go and retweet that little nigga, yo
Man are saying that I blew up too fast
Man are saying that I came up too quick
Rudeboy, look on the YouTube, darg
Mandem are putting in the graveyard shift
Dem man there straight wash
Brudda, don't blame me, go and blame God
Every MC wan' try and take shots
Tell 'em boy there hard work pays off
Anyway, everybody wanna do grime now
Real talk, let's not lie now
Yeah, look brudda, this my house
That's my laptop, that's my sound
That's my people, that's my crowd
That's my kingdom, that's my crown
Look, one phone call, man'll fly around
I lay one vocal then I sign out, anyway
Go blue jays for a lunch and a brekky
Make that thing bu-bu-bang like Fekky
Got mad still with the ting, I'm TECCy
Onstage, go back to back with Skeppy
When I'm on the ball, I'm cool like Messi
Man just talk, don't talk, be steady
Tell 'em that I'm down for the war, I'm ready
Them man change circles, they're... wait

Them man just wanna rap like me
Put their city on the bat like me
Creps on my feet, yeah, they're white like Cons
But the car that I drive, that's black like me
Man can't call me cold or more
Cuh I'm past that, when I'm on the track, I freeze
Them man there spit ammy and bud but
None of them don't spit crack like me like
Me vs. you don't make no sense
Might go gym, might go get hench
I go in, I go intense
In year 8, I was like 5'10"
But anyway, fuck that
Used to roll through the ends in my rucksack
Me and Mermz got caught but we bussed that
Touch one of my mandem, you get touched back
But fuck that, Stormzy man, I go sick
No, I ain't calling man for no brick
Know about 40 man that hold sticks
So no, I ain't warring man for no chick
Please don't call me fam, you're not Flipz
Ask that Morleys man for more chips
It's not just cameramen that hold clips, shit
Kill 'em with the skengman sound
Skengman flow, skeng man down
What's your postcode? Send man round
10 man up, 10 man down
Wait, wait, kill 'em with the skengman sound
Skengman flow, skeng man down

Look, I put my city on my shoulders
You ain't cold, I'm cold, I'm the coldest
Put my Adidas creps with my Nigo top, you can't get this yet, man are jokers
Yeah look, I made a tune with Nick Jonas
They said I sold out, that's bogus
I do a Fire in the Park, 3 million views, now it's album time and I focus
Look man, I'm the one they all fear
I was the man of the year last year
Now I'm the man of the year for the second year straight, like nobody don't compare
And now I'm sitting on the top and I'm looking straight down like, hold on is anybody there?
Shut down Malia, shut down Iceland, oh my god this shit's not fair
Look man, I was on the roads when Dizzee made Stop Dat
You're not a badboy, stop that
Peng tings on my WhatsApp
Yeah they love when I drop that
Niggas still ask where'd I cop that
Jump in a new shaped Coupe then I dropped that
Face is bait so I drop back
Watched MCs wanna beg for their spot back