Why We Thug Lyrics

Lyrics to Why We Thug

Why We Thug Video: 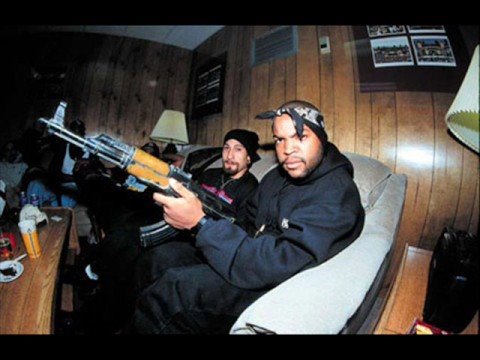 I'm from the land of the gang bang
Since I was little, ain't a god damn thang changed
It's the same ol same
Bush run shit like Sadaam Hussien
I cock and aim, clinically insane
To deal with this bullshit day to day
If I sell some yay or smoke some hay
You bitches wanna throw me up in pelican's bay
Call me an animal up in the system
But who's the animal that built this prison
Who's the animal that invented lower living
The projects, thank god for Russell Simmons
Thank god for Sugarhill
I'm putting a different kind of steel up to my grill
Y'all know what it is, scared for your own kids
How these ghetto niggaz taken over showbiz

It's boyz in the hood, it's toys in the hood
Y'all wanna know why there's noise in the hood
Cause there's drugs in the hood, thugs in the hood
Nigga killed a crip and a blood in the hood (For real)
Cause when niggaz get tribal
It's all about survival, nobody liable
I got caught by five-oh
Grandmama came to court with her bible
But when the judge hit the gavel
Now I'm too far from my family to travel (Fuck)
I just came unraveled
Socked the D.A. before I got gaffled
Owned by C.A, State Property
Just like the year fifteen fifty three
Looking for me, a one-way ticket out
Don't understand, what's so hard to figure out?

(Damn) I can't take the pressure
Pulled the fo-fo up out the dresser
Grabbed the weight up out the closet
Po-po coming but I'm scared to toss it
Y'all know what happened last time I lost it
Can't tell you niggaz what the fuckin boss did
The game got a nigga exhausted
Gotta go for the plea bargain they offered
Twenty years for what?
Breaking these laws that's so corrupt
Taking these halls and fillin 'em up
Some powder cake shit that's about to erupt
Ay y'all, I'm about to be stuck
Until the year two thousand, what the fuck?
In the hood, don't press your luck
Cause these motherfuckers will set you up, word up