Lyrics to We're All Gonna Die 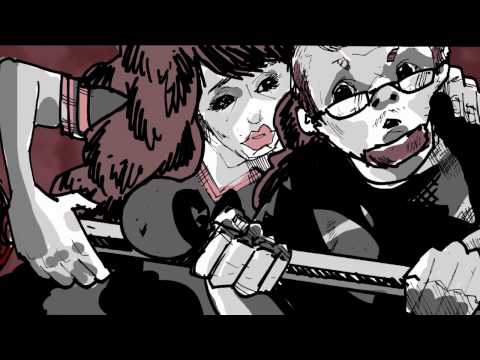 Nerd: (Spoken): Hello? Is there anyone in here? It's so dark...Sara? Steven? Where'd you guys go? Maybe down this dimly lit pathway to the basement. Are you guys messing around? Why is the floor so sticky?

Holy crap, you guys! Are you all ok?
Who'da thought this field trip would turn out this way?
When we left today for this factor-ay
I never thought this'd be our final resting place
You know we were so surprised when we found
This place was built on ancient burial ground
But the teachers didn't really seem to fear
When couples from our group began to disappear
First Greg and Peg both vanished together
Then Alfred was gone, quickly followed by Heather
I just heard Sara and Steven starting to shout
They had just run off to go make out
I'm only still alive cause I'm still a virgin
The killer chopped em up like he's some kind of surgeon
And stacked their body parts way up on a shelf
Oops, I think I just soiled myself.

So look out, a killer's on the loose
What's he want, can we call a truce?
My guy was hung, but now it's from a noose
I don't think I can live through this abuse

Everybody let's all calm down
Everything is gonna be alright, but right now
We need a leader and it oughtta be me cause after all
I'm the captain of the football team, I outrank you all
So what's the situation? Emily's dead?
A psychopath took a weed whacker to her head?
We're trapped inside a house and there's a killer comin' at us?
Hang on, let me post that on my Facebook status
We need to find weapons, everybody look around
If we split up into teams then we can cover more ground
You two go upstairs, if you need me send a text
I'll be here with the hot cheerleader having sex
Insert obligatory nude scene here
That was great, nice rack, hey you got any beer?
Yeah you go freshen up, I'll be here when you get back
Hey what was that? *stab* Schaffer: Haha! Now you're even better in the sack!

Wait a minute here aren't you that nerd
You want to take on the killer? Absurd!
I must admit a hunky hero's preferred
But it's really sexy that you won't be deterred

Your crush on me I've always taunted and spurned
But your bravery has my thoughts on you turned
I could change my feelings where you're concerned
Holy crap! Look out! The killer's finally returned

In a last act-slash-fast visceral scene
A cold chill and scream reveal the killer as me
A chainsaw in one hand, machete in the other
In a mask and coveralls, all bloodily covered
In the guts of your friends, you're realizing it then
That historically, the last meets the goriest end
I get your neck in my grasp as you grab at my mask
And at last pull it away from my face as you gasp
*Ian: It's you! Yeah, it's me, and it was all along
Your creepy outcast classmate never invited along
To join in the fun of this field trip or any other
So I got revenge and built a shrine to my mother
And now you're gonna die too like all the rest
Could stick an axe in your face or punch a hole through your chest
Or chop you in half, watching every drop of you drain
You've got the body, I've got the brain

Please tell me you thought to bring a gun
Or you know an escape route we can run
You say, weapons, you've got not a one
I think this time we surely must be done

The game's at an end, it looks like we're screwed
To get chopped up by some mask wearing dude
But I look to the chick, my hope's been renewed
I'm not gonna die before I've touched a boob!
You've got me by the neck, everything's going black
I reach in my back pack for something to attack
I rummage around, at your face i will claw
Til I find the missing Gypsy's voodoo doll
I speak the magic words that the old woman taught me
And never again will you come back to haunt me
I banish your soul, I send you to hell
And for extra measure, I kick you as well
It looks like I've won! I'm the hero, revered!
No one seems to see the killer's body disappeared.
And I got the girl! To me there is no equal!
Schaffer: That's ok, kid, I'll just kill you in the sequel!