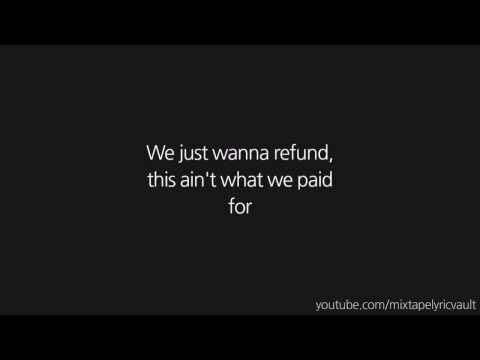 Now when that shit went down with Chris, you wrote a check
In New Orleans wore my chain to get respect (you a fraud)
So what that tell me? You a pussy and a fan
Said they run with you we the shooters at your neck
I just wanna know, if you ain't write that running through the six shit
Tell us who the fuck Quentin out here running through the six with?
(Running through the six with my woes
Counting money you know how it goes
All the real live forever baby
And the fakes get exposed)
Niggas writing for you cause you know you never did shit
When I threw that hook out I was tryin' to catch a big fish
We the type of niggas to tie your mother up
Fuck your sister in the ass and hit your brother up
You really sweet, I call you buttercup
You fucking dork you come at us because you studied us
Coming with the same flow
Switching up your lingo
We just want a refund this ain't what we paid for
Every time that we come, we get what we came for
Spitting another niggas shit, what you claiming king though?

Money make a fake ass nigga look real again
Money make a sucker that's hoe look thrill again
Says a lot about all those people that's filling in
But I ain't see all you suck ass niggas look real again
Heard that other nigga talking we ain't get back yet
Let's keep it short, nigga you ain't get your chick back yet
And now she rocking with the chance and now you missed that check
You went from clear puss to butter [?] and missed that jet, hold up

You know you fucked up right?
You shoulda just said nothing
Now you're going to have to give me a check to stop
All I hear is platnium that platinum this
Meanwhile I'm on the cover with a platinum chick
I got a platinum rollie, platinum whip
Niggas frauds I told the truth, don't ask me shit
All this industry fake enemy and rap shit
It's never really my style we got cash to get
I really started from nothing now it's back to shit
Puffy almost caught a domestic when he smacked that bitch
Hold up, let that bitch breathe

You let TIP homie piss on you in a movie theater, we ain't forget
Real niggas back in style this shit is lit
This that Ja Rule shit and 50 cent