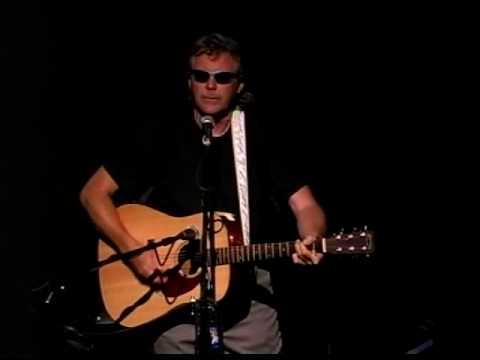 Well now friends you'll never guess it so I really must confess it --
I just met the sweetest woman of my long dismal life.
But a friend of mine said, "Buddy, just in case your mind is muddy,
Don't you know that girl you're fooling with is Peg-Leg Johnson's wife.
And that man is big and rough and mean and grim,
And he'll brain you with his artificial limb.
But next morning bright and early I stole old Peg-Leg's girlie,
And I also took his wooden leg just to play it safe.
But there weren't no time for laughter 'cause he started hopping after,
And I keep on running faster but he won't give up the chase.
And I'm running through the mountain with his bride,
And I got his wooden leg here by my side.

I'm a three-legged man with a two-legged woman
Being chased cross country by a one-legged fool.
Though he's huffing and he's puffing and he shows no sign of stopping,
I tell you, boys, this life is hard and cruel.

'Cross the deserts and the valleys and the dark Chicago alleys --
'Cross the mighty Mississippi to the hills of Caroline.
Through the mountains of Montana and the swamps of Louisiana --
Every time that I look back he's JUST one foot behind.
And I know he must be cold and wet and sick,
But in spite of all his woes he can kick.
Now he's ragged and he's filthy, and I'm feeling mighty guilty
'Specially in the evenings when I hear him plead and beg.
He says "In spite of all your stealing friend, I bear you no hard feelings.
You can keep that darned old woman but please give me back my leg."
'Cause although the one you meant to take was wooden
In the dark by mistake you took my good'un.