The Shot Heard 'Round the World Lyrics

Lyrics to The Shot Heard 'Round the World

The Shot Heard 'Round the World Video: 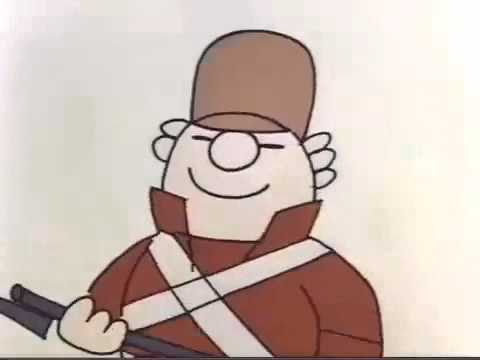 Now, the ride of Paul Revere
Set the nation on its ear
And the shot at Lexington heard 'round the world
When the British fired in the early dawn
The War of Independence had begun
The die was cast, the rebel flag unfurled

And the shot heard 'round the world
Was the start of the Revolution
The Minutemen were ready, on the move
Take your powder, and take your gun
Report to General Washington
Hurry men, there's not an hour to lose!

Now, at famous Bunker Hill
Even though we lost, it was quite a thrill
The rebel Colonel Prescott proved he was wise
Outnumbered and low on ammunition
As the British stormed his position
He said, "Hold your fire until you see the whites of their eyes!"

Though the next few years were rough
General Washington's men proved they were tough
Those hungry, ragged boys would not be beat
One night they crossed the Delaware
Surprised the Hessians in their lair
And at Valley Forge they just bundled up their feet!

And the shot heard 'round the world
Was the start of the Revolution
The Minutemen were ready, on the move
Take your blanket, and take your son
Report to General Washington
We've got our rights and now it's time to prove

Well, they showed such determination
That they won the admiration
Of countries across the sea like France and Spain
Who loaned the colonies ships and guns
And put the British on the run
And the Continental Army on its feet again

And though they lost some battles too
The Americans swore they'd see it through
Their raiding parties kept up, hit and run
At Yorktown the British could not retreat
Bottled up by Washington and the French Fleet
Cornwallis surrendered and finally we had won!

From the shot heard 'round the world
To the end of the Revolution
The continental rabble took the day
And the father of our country
Beat the British there at Yorktown
And brought freedom to you and me and the U.S.A.!