Lyrics to The Roaring Land 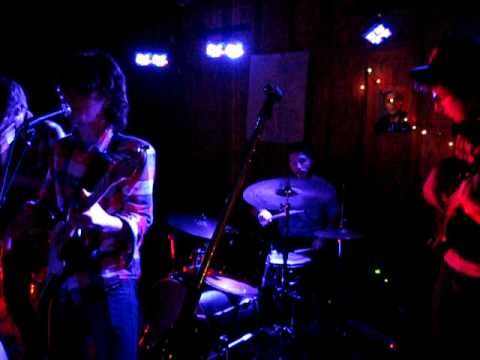 the wind's gone wild, the violent ghost
stares through the window at the cocky young talk-show host
whose voice is booming
but strangely soothing
in a cube of precious, restless space
while the city's boiling
and not listening
to the paper bastard's painted face

so that's that
with an electric flash
of broken glass
blood, bones, and skin
they all just blend right in
but the cameras never cease to roll
when life has lost control
to the roaring land
upon which nothing stands

i'm the broken baby
who's gripped by sea
with only seconds until
the end of me
and i can see it coming
that metal hand
as it gathers up the final prize
when that gallant laughing
gets funnelled in
through your ears, your mouth, and your eyes

it's a downpour of dead birds
to the steaming ground
of this pitch black town
and you better find yourself some shelter
down, the sun's been pulled
and now she's creeping invisible
and i fucking swear that i just felt her

when my house starts melting
i will be wrestling my ghost

with a foot on his face,
i will whip out the mace
and slam it down,
slam it down with amazing grace

i can't stop driving, just searching the city
trying to catch up with my yellow school bus
smelling the scents that will one day remind me
of my love and where it never ever got us

you dont need eyes to see that

i will be spinning fast this sphere, closing my eyes,
and pressing my finger here

down underneath the violent waves
i will anchor to the bottom
i will bury my face
i wil be untouched by the weather, untouched by decisions, free to sleep forever

i was sucking on rejected apples
dodging all the circles of light
weaving through the well-lit mansions
of the great white elite at night
when the cracks began splitting the ground
and in fell the trees to the firey seas of the underground, spiraling down
half-eaten dinners and repenting sinners all clutter the crumbling town

and the laughter sign is blinking on and off and on and off...
with hysterical flashing, the lights all come crashing
they slice up the godly, young prince
who blows a kiss, gives a bow, from across the abyss to kids in the audience

the hurricane left caskets
resting on the laughing ground

of the oblivious earth
just 4 weeks before your birth

you're staring straight into the eyes
of the overwelming afterlife

downstairs,
the television's more than half awake
and it's laughing loud
letting the cold dawn break
singing, "release the fuming monster
from its home in the poison lake"

and deny that your mind was designed to murder you

then maybe some good will come
from your head to the great hum,
but you must break your thumbs

do you want heaven, or do you want hell?
i've got both right here to sell
but man, nothing you've done is you're fault
if you've had to be here at all

flashing on like a flood,
my fellow god wrote the world in the mud.

surfaces and structures
and sounds to turn off

but the rest is nothing
and we know that now
off alone with its tame, simple screams

it's our job to cover them,
not to make sense of them,
and to dream of having better dreams"