Lyrics to The Presidents 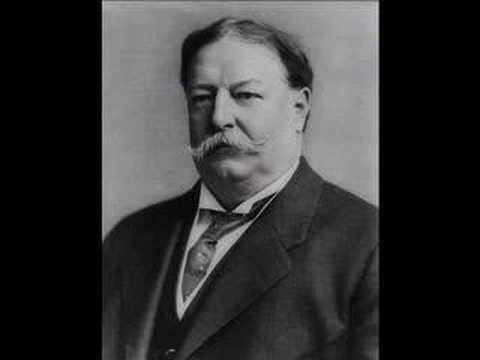 Washington came first and he was perfect.
John Adams kept us out of war with France.
Jefferson made Louisiana Purchase.
In 1812 James Madison kicked the British in the pants.

James Monroe told Europe they could suck it.
John Quincy Adams looked just like his dad.
Andrew Jackson got rid of all the Indians.
Van Buren served one term, but he wasn't bad.

McKinley kicked the Spanish out of Cuba.
Roosevelt was handy with a gun.
Taft was big and fat and had a mustache.
Wilson kicked some ass in World War I.

Harding said "Let's Laissez Fair with business."
Coolidge made the roaring 20s roar.
Hoover screwed the pooch in the great depression.
Roosevelt beat the Nazis in the war.

Truman dropped the bomb on Hiroshima.
Eisenhower kept the Commies well in hand.
Kennedy was killed by a magic bullet.
Johnson murdered kids in Vietnam.

Nixon was a sweating, filthy liar.
Ford gave Nixon pardon for his crimes.
Carter lusted in his heart for peanuts.
Reagan won the Cold War, and lost his mind.

George Bush Sr. poked at Saddam Hussein.
Clinton gave an intern a cigar.
W's legacy's a work in progress.
That is all the President's so far.

In the year 2005 we're out of money.
Somewhere, surely, freedom's on the march.
I don't like to make political statements.