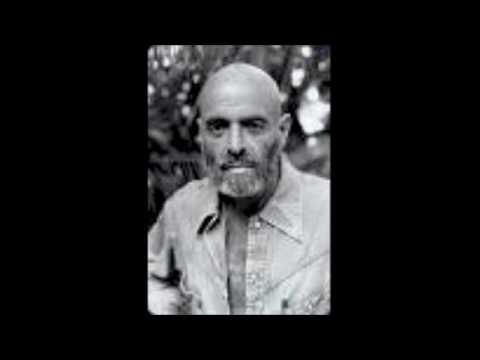 There was Gemini Jim and Scorpio Sal
They was livin' by the Golden Gate
Freezin' their nose and wearin' leather clothes
And dealin' every way but straight.
They had a Leo dog and a Capricorn cat,
And everything was goin' fine
'Till into their life on a starless night
Come the man who got no sign.
Look out, Momma, he's headin' this way,
One eye yella and the other one gray,
Lookin' for a soul, but he won't get mine.
He's the man who got no sign.
Well he blew right in, sat right down
And rolled himself a righteous smoke.
He lit his roach with a lightnin' bolt,
He took a toke and spoke.
Said he was born in an astrological warp
When the moon refused to shine
On the cusp of nowhere and nevermore.
He's the man who got no sign.
Then he told a story of his endless search
To find his missing part,
And Sal she sits and smiles at him
And tries to do his chart.
Till Pisces Ben, who was Jim's best friend
Said, "Man, you must be blind.
Your chick is lost 'cause her star is crossed
With the man who got no sign."
Then late that night two shots rang out
From Jim's old .32.
He caught the stranger and Scorpio Sal
Doin' what they shouldn't do.
When we got to the shed, there was Jim by the bed,
Where Scorpio Sal lay dyin'.
But a blood-red stain is all that remained
Of the man who got no sign.
The arrest was made by Sheriff Slade,
An Aquarius through and through.
And the jailer was a Sagittarius.
She he beat Jim black and blue.
Then they dragged him up the courthouse steps.
They said, "Jim how do you plea?"
He said, "Man, the moon's in Virgo
So the blame don't fall on me."
The jury all was Libras,
So you know they was more than fair.
But his lawyer was an Aries,
And an Aries just don't care.
The judge he was a Cancer,
And Cancers have no friends.
But the hangman was a Taurus,
And that's where Jim's story ends.
But late at night, when the stars are right
And the moon is gray and dim,
Two ghostly figures roll around
On the grave of Gemini Jim.
One is the ghost of Scorpio Sal
As she moans and shrieks and grinds,
In the endless come that she's gettin' from
The man who got no sign.