The Wild, The Innocent & The E Street Shuffle

Lyrics to The E Street Shuffle 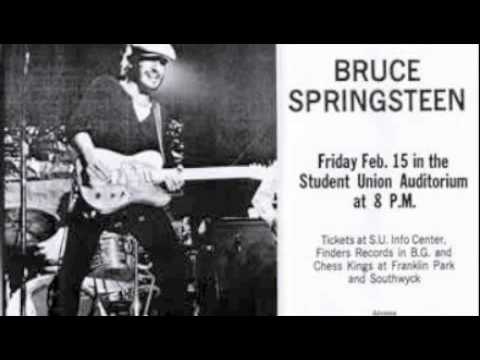 Sparks fly on E Street when the boy prophets walk it handsome and hot,
All the little girls' souls grow weak when the manchild gives them a double shot,
The schoolboy pops pull out all the stops on a Friday night,
The teenage tramps in skin-tight pants do the E Street dance and everything's alright,
Little kids down there either dancin' or hooked up in a scuffle,
Dressed in snake-skin suits packed with Detroit muscle
They're doin' the E Street Shuffle.
Now those E Street brats in twilight duel flashlight phantoms in full star
stream,
Down fire trails on silver nights with blonde girls pledged sweet sixteen,

The newsboys say the heat's been bad since Power Thirteen gave a trooper all he had in a summer scuffle,
And Power's girl, Little Angel, been on the corner keepin' those crazy boys out of trouble,
Little Angel steps the shuffle like she ain't got no brains,
She's deaf in combat down on Lover's Lane
She drives all them local boys insane.

Sparks fly on E Street when the boy-prophets walk it handsome and hot,
All them little girls' souls grow weak when the manchild gives them a double shot,
Little Angel hangs out at Easy Joe's. it's a club where all the riot squad
goes when they're cashin' in for a cheap hustle,

But them boys are still on the corner loose and doin' that lazy E Street
Shuffle,
As them sweet summer nights turn into summer dreams Little Angel picks up Power and he slips on his jeans as they move on out down to the scene
All the kids are dancin'.