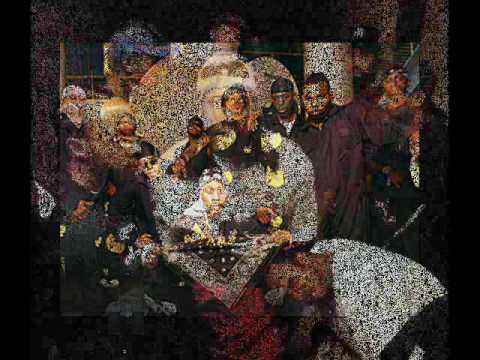 Yo check yo yo, check the script
Me and the gods get it ripped
Blunts in the dip, forty dogs in my lip
Had a box, 'Boom Boom' the bass will blast
We was laughing, at all the girls that passed
Conversation, brothers had begin to discuss
(Hey yo, Ra, remember that kid ya bust?)
Aw yeah, he ran, but he didn't get far
Cause I dropped him, heh heh heh heh heh HA
Not knowin, exactly what lied ahead
My little brother, my mother sent him out for bread
Get the Wonder, it's a hot day in the summer
Didn't expect, to come across, a crazy gunner
"Hey Shorty, check it for the bag and the dough"
But he was brave, looked him in the eye, and said "No!!"
Money splattered him, BOW! then he snatched the bag
In his pockets, then he jetted up the Ave.
Girls screamin, the noise up and down the block
(Hey, Rakeem!) What? (Your little brother got shot!)
I ran frantically, then I dropped down to his feet
I saw the blood, all over, the hot concrete
I picked him up, then I held him by his head
His eyes shut, that's when I knew he was...
Aw man! How do I say goodbye?
It's alway the good ones who have to die
Memories in the corner of my mind
Flashbacks, I was laughin all the time
I taught him, all about the bees and birds
But I wish I had a chance to sing these three words

Me and my man, my ace big Moe from the shelter
Bout to hit the skins, from this girl named Thelma
Now Thelma had a rep, that was higher than her neck
Every girl from Shaolin dissed her respect
We was stimmy, you know how it is when you're blitzed
Three o'clock in the morning, something gots to give
Moe said he'll go first, I said I'll take next
Here, take this raincoat, and practice safe sex
He seemed to ignore, I said be for real
She's not even worth it, to go raw deal
A man's gonna do what a man's gonna do
He got butt-naked and stuck the power U
Twenty minutes went by, my man went out, without a doubt
I'm not pumpin' up, I am, airin out
Hey yo, he came out laughing with glory
I'm surprised, he's still livin', to tell his story
But he carried on, with the same old stuff
with Stephanie, like a whammy, he pressed his luck
Both tried to be down with O.P.P.
Ain't nuttin' wrong but he got caught with the H.I.V. now
No life to live, doc says two more years
So after the laughter, I guess comes the tears