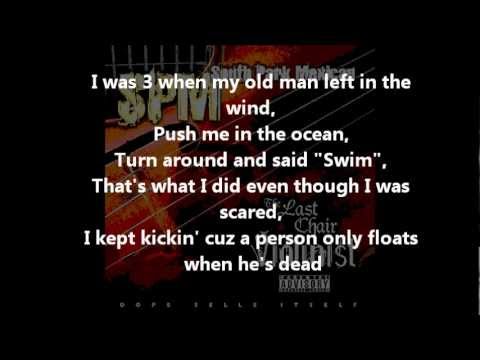 [Chorus:]
I was three when my old man left in the wind
Pushed me in the ocean, turned around and said "swim"

If I had one wish, It wouldn't be wealth
It would be that if we could just love ourselves
Cause every day it's like we kill a million dreams
and it seem everybody on different teams
I don't mean to get deep, I'm just speakin the truth
we in a two-bed traila with a leak in the roof
I ate potatoes every way you could ever make'em
When you're hungry gotta use your imagination
My mom did her best, she would hug and kiss me
Even though we had more fuckin mice than Disney
I still had some polo's and plenty new draws
While she was livin life with the same tow bras
The lighting strikes like Garth say thunder rolls
Life is cold like an Eskimo in summer clothes
I suffa softly, but never let nothing stop me
And I miss my little girl like somebody shot me

I be prison made cross, fuck diamonds and jewels
Still flya then Jordan when he was runnin with bulls
So many shots had missed, so many cops was pissed
So many songs I have written in the past on this
It's a lot of impostas tryda tell you the same
But how the fuck can I explain, no one knows my pain
From the cord on my navel I was G from the cradle
I don't snort'cause they say that bitch Caine killed Abel
I'm not sure you understand it but I must express it
Santa Claus is on heroine, there ain't no presents
And Mom all this shit makes my eyes so watery
Now I understand why you tried to win the lottery
We gon' make it I promise, don't let the memories haunt us
I remember we was at the bus stop in pajamas
Tryna run from a home that brought so many tears
Bad luck like we musta broke a thousand mirrors