Stone of Destiny (...for Magh Slecht and Ard Righ) Lyrics

Lyrics to Stone of Destiny (...for Magh Slecht and Ard Righ)

Stone of Destiny (...for Magh Slecht and Ard Righ) Video: 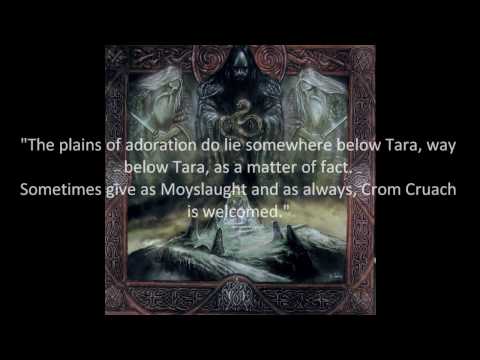 We are the gold-torqued leaders.
Three wild horsemen:
Three fearless in combat -
Three gold-crowned conjurers of clash, yet
Three clannish chiefs from the Kingdom of Midhe...

The leading, foremost tyrant -
The subsequent tormentor, and
The past intimidator of Cythr¡ul
Are impending.
"Has there ever been a better idol than Dagda?
Will there ever be a better icon than myself?"

"In the yes of myself, I fervently speak."
The trio goes out at dawn.
Fiercely, we plan to fight our assailants:
Three of us versus three thousand: complete.

"In the eyes of myself, I adroitly scream!"

"WE WILL ARRIVE AT THE STONE OF DESTINY." (Tara)
"WE WILL REACH THE PERDITION OF IBID." (Cythr¡ul)

"With the sway of myself, weather means disaster.
I affirm each day for the men of the brave."

As our swords of steel, their mead, and courage are fused.
Is it not the throne for our Master of the Gulch?
On its trim are rings of pearls, polished.
One seat remains near the jaded citadel.

[First Supposition - Narration:]
"The plains of adoration do lie somewhere below Tara, way below Tara, as a matter of fact.
Sometimes give as Moyslaught and as always, Crom Cruach is welcomed."

"With the sway of myself, weather means disaster.
I affirm each day for the men of the brave."

[Final Supposition - Narration:]
"The notorious Klan stands by the ramparts at Tara where all enemies are approaching.
Being bound by a geis, the three have no choice but to stand against the feeble units.
Enveloping in an opaque mist, they suddenly find themselves in a magical place where they are
received by the deity Manann¡n and a courtly witch. Finally, they begin to walk up the steep
grassland of Tara, with wand and sword, which enables them to distinguish the truth from the lies."

It is the chair for our Master of the Tor.
It is embellished with bullion: marked.
It remains on top of the lofty mound.
It streams gray and silver lining.
It will be an accolade given to us.
That is, by the third of the last king.