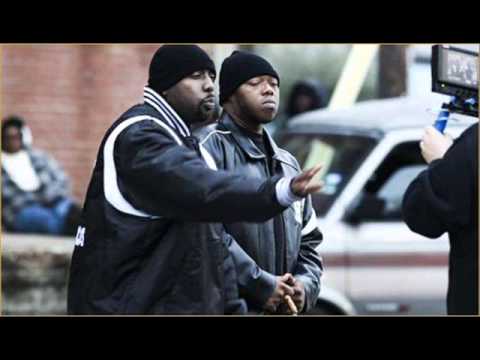 [talking:]
Uh oh, S-L-A-B soldiers in this bitch mayn
Trae on the mic mayn, my lil' brother Galo
Classy D yes sir, it go down mayn
Slab soldiers for real, mob style for life mayn
Squeeze the block, till it ain't nothing left
This C.L., from the West mayn

[Lil' B:]
H.A.W.K. done rolled in a wide load, with candy paint on 84's
Got a calico for a hating hoe, that'll beat the clown like Bozo
I'll tag your toe when I hit you hard, let you know I really don't bar
Step on the scene then pull your broad, getting mad I'll pull your card
Call it far but that's how it go, down here in the S-O
Riding solo in a fo' do', call me Lil' B I'm Bybo
I wreck a show when I rock a stage, slab blasting off like a twelve gauge
Niggaz seem amazed we on the front page, bout the feddy we getting paid
Playa made and that's on the click, but these bopping hoes be riding dick
I hit her quick then leave em sick, fuck shooting a arrow like cupid
They stupid I'm a thug nigga, stepping out in Gucci how you figga
Your bitch out of line you better gon get her, head buster I'm a wig splitter
You can't forget a nigga don't play, represent the Park I'm on Fewquay
I gotta let my top down on a sunny day, it's S.L.B. bitch get on out the way

[Trae:]
I recommend that y'all get back, 'fore I get pissed off and I wreck tracks
You niggaz be liking the chit-chat, better duck when I'm busting on contact
A guerilla be ready for combat, four deep when I creep in a black Lac
You think you the best nigga bet that, everytime I spit see I'ma squash that
I got slab soldiers street cruisers, mouth piece like a load abuser
Twin rugers, coming out the roof in a Land Cruiser
You don't wanna plex cause I'm gonna do ya, I ain't tripping I'm ready to get it on
Did you hear the fat lady sing, hell naw so I got about eight mo' rounds of fucking up your dome
Bitch you done fucked up and got a nigga pissed, now I'm bout to get all up in your shit
Lean on a nigga like I'm a bumper kit, off the chain ready to bite like a pit
But Donny D we throwing up South Klique, living on lock down
Don Juan I ain't forgot ya, see you already know I'ma shut they block down
And now y'all niggaz finna disrespect, cause I run up they set fin to leave you wet
When I'm pulling this it's only gon take a sec, and when I let it go you better run like a bitch
Half of you niggaz better go get a job, you thinking you better than me
Your rap skills we gon let it be, nigga you know you'll never see me

[Mr. 3-2:]
It's the Big Boss in a Harley, Fat Domino
I make the broads work the track, and bring back payroll
No, I don't go for them games
Shoot a infrared aim, and that's a god damn shame
How I'ma lay em in niggaz tonsils, out here in these streets
Fuck starving I'ma eat, baby I bring heat
On every side of town, bleeding us underground
Have my weight up, knocking out boys in the first round
I stay down, like the ground you walk on
Right quick right fast, bitch I'm worldwide known
Blown out the frame, on a come up mission
For the face big heads, leaving boys missing

[Showtyme:]
Step in my path'll get you gone, spinning necks like a wheel of chrome
When I come through better guard your dome, like the nigga Trick Daddy I'ma take it home
Smash the gas I'm moving fast, I'm on a paper chase gotta get that cash
Deep in the South where I keep my stash, a nigga like me might beat your ass
Call me a chicken break it down, nigga bricks know all over town
You don't really wanna fuck with my underground fool, cause this undeground shit ain't got no rules
You niggaz want a game I play to win, the nigga Showteezy did it again
Cocked up deuce trays in a bubble eye lens, you could say it on a Lexus Lac or Benz
Customized nigga you can't buy nowhere, think flyness gotta be in the air
Side to side nigga you could find me there, this shit's so hot you get burned from the flare