(She's Got a Butt) Bigger Than the Beatles Lyrics

Lyrics to (She's Got a Butt) Bigger Than the Beatles

(She's Got a Butt) Bigger Than the Beatles Video: 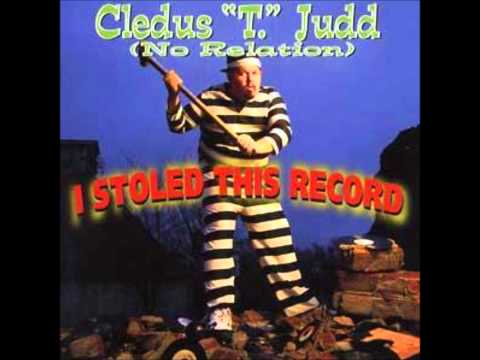 She cooks with lard,
Loves hot food bars.
A quart of sweet tea,

And fried pork skins.
Can't get enough,
Eats 'til she's stuffed.
Goes to the bathroom,
Then she comes back again.
She thinks she looks just like Madonna,
When she runs her greasy fingers
Through her bleach blonde hair.
Most times, she'll place another order,
And, Lordy, have mercy on that little bitty chair.
She's got a butt bigger than the Beatles,
Eatin' me out of house and home.
Her booty size, well, it outta be illegal.
She has a hard time, sittin' on the throne.
Hamburgers, hot dogs; cheese fries and coleslaw.
A dozen bearclaws; yum, yum, yum.
Loves sausage links; hates diet drinks.
Takes up both seats, in a two-seater car.
Her doctor said: "Lay off the bread,"
But he didn't say nothin' 'bout a Snickers bar.
She drinks sweet milk by the gallon,
And she'd never eat a salad or a lean cuisine.
Then she'll lay spread out on the hammock,
After she's done her damage at the Dairy Queen.
She's got a butt bigger than the Beatles,
Folks make fun 'cause she's overgrown.
Her rump's shaped like a Volkswagen Beetle.
She gives new meaning to the words: "Big boned".
Bagels and cream cheese; vanilla ice cream.
A tub of whipped cream; yum, yum, yum.
No, you won't find her name on the weight loss wall of fame,
Down at Jenny Craig's.
When she cleans 'em out at the waffle house,
They'll bring in more ham and eggs , oh.
She's got a butt bigger than the Beatles.
Her favorite food is chocolate ding-dongs.
It's wide enough to play line-backer for the Eagles.
Deon Sanders better leave her alone.
Try chicken that's baked, or fat-free milk shake.
Enough for God's sake: Stop the insanity.
Weight watchers, yeah.
Weight watchers, yeah.
Yeah, I watched her weight.
I watched it go from one seventeen and a quarter when I married her,
To three hundred and seventeen and a half, two-and-a-half years later. Mooo!
But I still love ya, honey.