The Disposable Heroes Of Hiphoprisy

Hypocrisy Is the Greatest Luxury 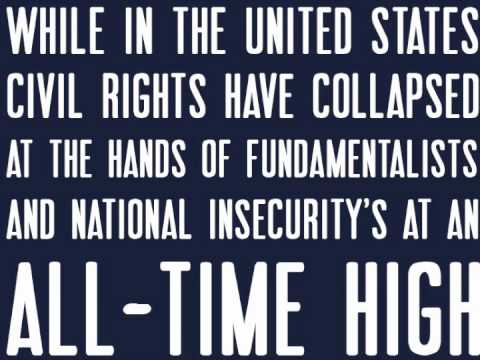 Exxon and on and on and on
The ministers of double speak
New meaning of clean they
Tried to teach us
They staged the phoney shampoo of the
Valdez greases
Completely jheri curled the beaches
Pipe bomb for the NAACP
And a hit on Salman Rushdie
The Berlin Wall comes down and the U.S. cracks down
On illegal aliens
Ban the freedom of choice for those
Wanting abortion
And enforce capitol punishment
Twenty four hour radio ban
For indecency determined by the F.U.C.C.
Why are we so anesthetized to the lies
Because we do it in our own lives
We believe all the things that we want to hear
But then we also love to criticize

Bail-out the banks loan art to the churches
Satanic Reverses

In 1992 the European economic community will reform
In 1997 the city of Hong Kong will become a part
Of the People's Republic of China
In 1999, and this is no coincidence,
The nation of Panama will control it's own canal
While in the United States civil rights have
Collapsed at the hands of fundamentalists
And national insecurity's at an all time high

'Cause he made a statement
They called it desecration
Of the symbol that was meant to represent
The freedom of so called choice and dissent
They almost had me believing it
They were bleeding him
He said, "Burn baby, burn"
'Til the street samurai
Said to my face that
Any flag that's worth a shit
Was woven from fire in the first place.

Bail-out the banks loan art to the churches
Satanic Reverses