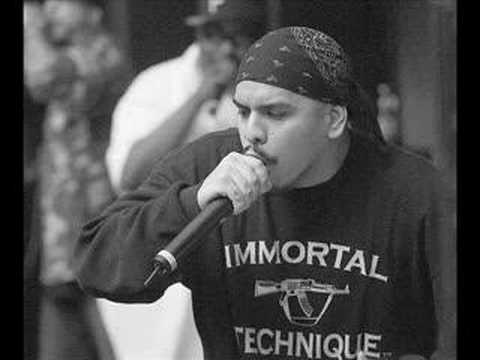 I'd rather be rich and unhappy than broke and miserable
Cause the game don't give a FUCK if you lyrical
And that's pitiful, so my position is pivotal
You can hate me all you like but you worship the principle
I inspire revolution, the government's not invincible
Vietnam to Venezuela, trick knowledge, they pimpin you
All up in the hood like McDonald's and liquor
Selling AIDS medicine, when we know you got the cure nigga (woo!)
You leery of conspiracy theory but hear me
Throw a business perspective, it makes more sense clearly
Cause moreover, that's what we go to war over
And numbers don't lie unless we do Bush and Gore over
Free markets make money disingenuously
But I invest in agriculture, biochemistry
Smart nigga from the hood, pussy, what type of crime is that?
But exec's are like, "You from Harlem? Where your diamonds at?"
Stupid

[Immortal Technique]
Yeah, this is how pimps get pimped and players get played
Rich people get robbed and, broke niggaz paid
New York, London, Chicago, Philly and L.A.
Miami, D.C., B-more and out in the Bay

[Immortal Technique]
Show me a pretty girl, with the world stuck to her
And I bet you there's a brother that's tired of fuckin her
Lots of niggaz girls is someone else's one night stand
I probably made some bitches nervous listenin with they man (ha ha)
And if that offends somebody, I'm sorry, fuck you!
What you think, revolutionaries don't like to fuck too?
You just gotta beware of dangerous coochie
Cover ya head like a kufi, some rappers think that they live in a movie
Until they get herpes or clap from a groupie
And I don't need to shout you out, nigga you know who you be
Look, most people are only players cause they got played
And have not, let go of that, shit since the 7th grade
Yeah you got your heart broke, life sucks, doesn't it?
But you shouldn't fuck up someone else's life because of it
Someone did your mother like that, that's why you fatherless
Before jail or racist cops, that's what the problem is

[Immortal Technique]
This is how pimps get pimped and players get played
Beautiful women get, cheated on and gangstas sprayed
Jersey, Detroit, Denver, Phoenix, Atlanta
Texas, Vegas, Seattle and fuckin Louisiana

[Mojo]
Regardless of money you payin
Just spendin, hold a watch and a chain
But can't offer your children a thang
What the hell is goin on in your brain?
We gon' turn it out

[Immortal Technique]
Yeah, I'm not a crack rapper, I'm not a backpacker (ha ha ha)
I'm not a wack rapper, moonlighting as a bad actor
I treat labels like the projects, cause I'm a hater (what!)
Go to the Sony building and piss in the elevator
Cater to hustlers, crooks and cheap smugglers
Bootleg my own album, to reach customers (yeah)
Every city, state and country, the hood love me
Even Aborigines, in Australia bump me
They say underground fans are all the color of talcum
But who the fuck you think buy 50 and Jay albums?
Who the fuck you think made Snoop and Dre platinum?
Call up any major record label and ask 'em
But there's some, devils in disguise in hip-hop
that belong at Republican fundraisers with Kid Rock (bitch!)
I hope one of my fans has one of your kids shot
And blames it on Acid, Prozac and Slipknot
You a pussy actin hard like a bitch cop
I'll drop you to the floor like a reverse wristlock
Eat your food and shit on you, like a highway pit stop
And make, revolutionaries out of kids that used to flip rocks
The government, pimped 9/11 to go to Iraq
And history, repeats itself right on track (how?)
First as a tragedy, and then the comedy begins (why?)
Cause it's funny, motherfuckers don't see it come around again