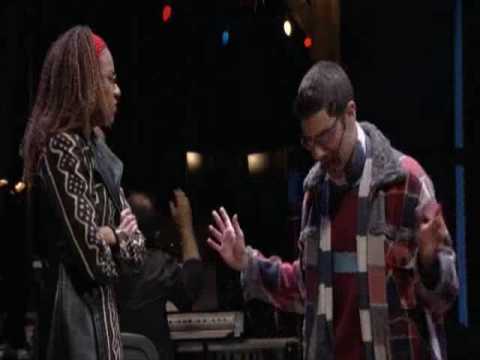 JOANNE Mark?
MARK Hi.
JOANNE I told her not to call you
MARK That's Maureen But can I help since I'm here
JOANNE I hired an engineer ...
MARK Great! Well, nice to have met you
JOANNE Wait! She's three hours late The samples won't delay But the cable --
MARK There's another way Say something -- anything
JOANNE (into the mike) Test -- one, two three --
MARK Anything but that
JOANNE This is weird
MARK It's weird
JOANNE Very weird
MARK Fuckin' weird
JOANNE I'm so mad That I don't know what to do Fighting with microphones Freezing down to my bones And to top it all off I'm with you
MARK Feel like going insane? Got a fire in your brain? And you're thinking of drinking gasoline?
JOANNE As a matter of fact --
MARK Honey, I know this act It's called the 'Tango Maureen' The Tango Maureen It's a dark, dizzy merry-go-round As she keeps you dangling
JOANNE You're wrong
MARK Your heart she is mangling
JOANNE It's different with me
MARK And you toss and you turn 'Cause her cold eyes can burn Yet you yearn and you churn and rebound
JOANNE I think I know what you mean
BOTH The Tango Maureen
MARK Has she ever pouted her lips And called you 'Pookie'
JOANNE Never
MARK Have you ever doubted a kiss or two? J
OANNE This is spooky Did you swoon when she walked through the door?
MARK Every time -- so be cautious
JOANNE Did she moon over other boys --?
MARK More than moon --
JOANNE I'm getting nauseous (They begin to dance, with MARK leading.)
MARK Where'd you learn to tango?
JOANNE With the French Ambassador's daughter in her dorm room at Miss Porter's. And you?
MARK With Nanette Himmelfarb. The Rabbi's daughter at the Scarsdale Jewish Community Center. (They switch, and JOANNE leads.) It's hard to do this backwards. JOANNE You should try it in heels! She cheated
MARK She cheated
JOANNE Maureen cheated
MARK Fuckin' cheated
JOANNE I'm defeated I should give up right now
MARK Gotta look on the bright side With all of your might
JOANNE I'd fall for her still anyhow
BOTH When you're dancing her dance You don't stand a chance Her grip of romance Make you fall
MARK So you think, 'Might as well'
JOANNE "Dance a tango to hell"
BOTH 'At least I'll have tangoed at all' The Tango Maureen Gotta dance till your diva is through You pretend to believe her Cause in the end -- you can't leave her But the end it will come Still you have to play dumb Till you're glum and you bum And turn blue MARK Why do we love when she's mean?
JOANNE And she can be so obscene
MARK Try the mike
JOANNE My Maureen (reverb: een, een, een...) MARK Patched
JOANNE Thanks
MARK You know -- I feel great now!
JOANNE I feel lousy
BOTH The Tango Maureen!