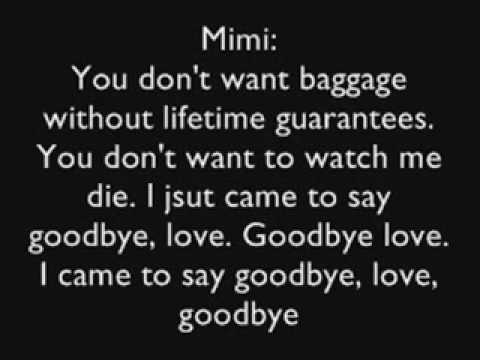 MIMI (to ROGER) It's true you sold your guitar and bought a car?
ROGER It's true -- I'm leaving now for Santa Fe It's true you're with this yuppie scum? BENNY You said you'd never speak to him again
MIMI Not now
MAUREEN Who said that you have any say In who she says things to at all?
ROGER Yeah!
JOANNE Who said that you should Stick your nose in other people's ...
MAUREEN Who said I was talking to you?
JOANNE We used to have this fight each night
MARK Calm down
JOANNE She'd never admit I existed
MARK Everyone please!
MIMI He was the same way -- he was always "Run away -- hit the road Don't commit" -- you're full of shit
JOANNE She's in denial
MIMI He's in denial
JOANNE Didn't give an inch When I gave a mile
MARK Come on
MIMI I gave a mile
ROGER Gave a mile to who?
MARK AND BENNY Come on guys chill!
MIMI AND JOANNE I'd be happy to die for a taste of what Angel had Someone to live for -- unafraid to say I love you
ROGER All your words are nice Mimi But love's not a three way street You'll never share real love Until you love yourself -- I should know
COLLINS You all said you'd be cool today So please -- for my sake... I can't believe he's gone (to ROGER) I can't believe you're going I can't believe this family must die Angel helped us believe in love I can't believe you disagree
ALL I can't believe this is goodbye

MARK I hear there are great restaurants out west
ROGER Some of the best. How could she?
MARK How could you let her go?
ROGER You just don't know ... How could we lose Angel?
MARK Maybe you'll see why when you stop escaping your pain At least now if you try -- Angel's death won't be in vain
ROGER His death is in vain
MARK Are you insane? There so much to care about There's me -- there's Mimi ROGER Mimi's got her baggage, too
MARK So do you
ROGER Who are you to tell me what I know, what to do
MARK A friend
ROGER But who, Mark, are you? "Mark has got his work" They say "Mark lives for his work" And "Mark's in love with his work" Mark hides in his work
MARK But from what?
ROGER From facing your failure, facing your loneliness Facing the fact you live a lie Yes, you live a lie -- tell you why You're always preaching not to be numb When that's how you thrive You pretend to create and observe When you really detach from feeling alive
MARK Perhaps it's because I'm the one of us to survive
ROGER Poor baby
MARK Mimi still loves Roger Is Roger really jealous Or afraid that Mimi's weak ROGER Mimi did look pale
MARK Mimi's gotten thin Mimi's running out of time Roger's running out the door ROGER No more! Oh no! I've gotta go
MARK Hey, for somebody who's always been let down Who's heading out of town? ROGER For someone who longs for a community of his own, Who's with his camera, alone? (ROGER takes a step to go, then stops, turns.) I'll call I hate the fall (ROGER turns to go and sees MIMI.) You heard?
MIMI Every word You don't want baggage without lifetime guarantees You don't want to watch me die I just came to say Goodbye, love Goodbye, love Came to say goodbye, love, goodbye
MIMI Just came to say Goodbye love Goodbye love Goodbye love Goodbye! ROGER Glory One blaze of Glory Have to find... (ROGER exits. BENNY returns. MIMI steps away.)
MIMI Please don't touch me Understand I'm scared I need to go away MARK I know a place -- a clinic
BENNY A rehab?
MIMI Maybe -- could you?
BENNY I'll pay
MIMI Goodbye love Goodbye love Came to say goodbye, love, goodbye Just came to say Goodbye love Goodbye love Goodbye love Hello disease