From The Celtiberian Woods 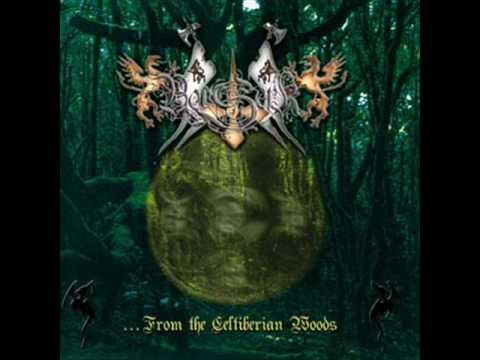 Feeling vengeance and hate... We think of last times.
No one never could see an army as mighty as ours.
For centuries, they ruled with their false authority...

Now we have the chance to end with them and to implant our Empire.
Dark Clouds cover the sky where we are,
And the nerves gradually hold down our bodies.
We long for cut the enemy's necks with these swords.
We windward and we can hear the movement of their troops.
A file of ravens accompany us from the departure, and we feel stronger with this.
The four elements guide us in the path
While the wolves wait in the mountains.
The berserk we put in the front of the troops.
Brave, as no men, without our help we can't defeat.
We will be the firs in attack for get weak to their men.
It's the time to fight... Thousands of bodies fall quickly.
We are convinced of the victory, for this, few of our men die,
And the men that die, do it with pride and honour.
This plain will cover of graves announcing our triumph.
This plain will be proof of the change of empire
After the battle, the landscape, that be left, is devastator.
Our wounded will recover and the deads will be moved to our lands,
So that the peasants can acclaim them as heroes.
Then the heads of the enemies will be hang at our homes as trophies.
Finally we have liberated our lands,
Later generations will thank it to us.
Ravens fly - Black horizons.