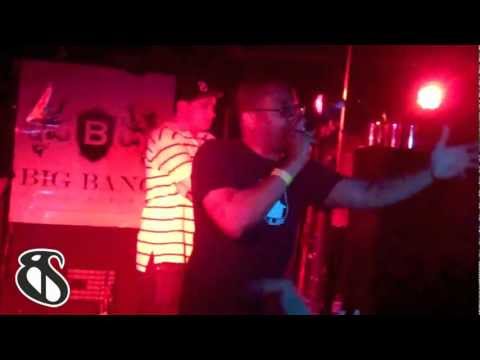 [Esoteric]
Dangerous lyricist, indigenous accent
My raps meant ya down fall
I surround y'all that sound small
In comparison to the magnimous, analyst
Paranormal panelist be plannin' this non-stop
Mass mutilation when bombs drop
The coppers stop the onslaught, not by a longshot
My razor blade, kicks the raps like ace of spades
Raise the flav' slay brigades
And while you place your raids
I space invade the pagan's age
Stealin' your belongings
Throw you off the rooftops
and bounce you off the awnings
Orion's belt, shameless Ryan supplyin' giant wealth
Now try and help the situation
My science spell decapitation
That's how I break ya concentration
Through a brain abrasion
All around my protocol's devoted to demotin' y'all
I noticed on ya promo
You ain't seein' Esoteric Lif or Virtuoso
Off the head or written, freestyle or premeditated
Any way you put it sucka duck you gettin' devastated
By the constellation, rotatin' space station
That's fully operational and capable of facin' you

[Mr. Lif]
Freed from the days when they had me workin' the fields
Throw up the shields block out all the negativity
Tryna stop the force my mind yields
Start harmin' em with a homonym
Damage him with an antonym and a hymn
For niggaz that's religious and vicious
When I was younger one of my wishes was to be an emcee
So I increase my calibre, on to be a veteran from amateur
Focus on my rhymes my grammar blur
Fuck up ya eyeball, deep penetratin' lyrics to get inside all
who don't fully understand my shit that's worldwide y'all
I drop bombs in Canada, then quadruple the parameter
Incredibly large diameter so niggaz feel my aftershocks in Africa
After the damage a cubic field I happened to vanish
(Troops of steel), yeh they sent 'em
So I dent 'em, then I gain momentum
But then I chill, and I return to the seas
Where I depend on microscopic air bubbles to breathe
Now this is a place that is cold and wet
Yet my fire inside, is supplied by the tide
I gaze at the moon and offer words of sacrifices
And then I jet, I got a tip on where the anti-christ is
And I'm bound to torture him with his own devilish devices
Muse his unrighteous, until the motherfucker's lifeless
And then I shall stand over the land as god
And walk amongst the masses who are mentally scarred

[Virtuoso]
I launch razor tip violin bones through the windows
Of an opera house that shot the mouth of a soprano
Alto, or baritone'll wear ya dome like a link
Every dart I thump to think'll chop a rocky chunker chink
Atop the nostrils of the Sphinx
'Lific god offerin' pots of ink
Lock you in a box with a rapid lynx
Stab you full of pinholes so you can breathe
I got ten souls I cleaved, from the inner sanctums
of the highest rankin' soldiers in the earth's, history
Who all attempted persistin' me, but fought listlessly
When they were faced with the epitomy of brute force
Leavin' tons of tongueless loveless, mute corpses
I loot your fortress, shoot your corporate bosses
Crumbles could make ya tuck
it's from the crossbows I've tossed foes in pits
This line refined, and givin' minds this desire
to constrict up ya spine at the slightest sign of a twitch
Bitch, my pernicious loquacious
rhymin' defaces what yo basic, motives to explode 'em
My cortex computer chips hold 'em and download 'em
I make ya troops minute like a tadpole's scrotum
Stab ya head wid a pole and pose in a human totem
Corrodin' bones like osteoporosis
I'm the chief loc'est in deep focus
I keep beats in chokers and beat
each promoter whose peeps print cheap posters a week
Boasters I eat notice my force'll creep
Wrote as a speech cobra
My mic slicin' words defeat, ogres
I fly in stealth, mode and explode the globe
when the fryin' pelts you'll die and know
Shot between the three stars of Orion's Belt