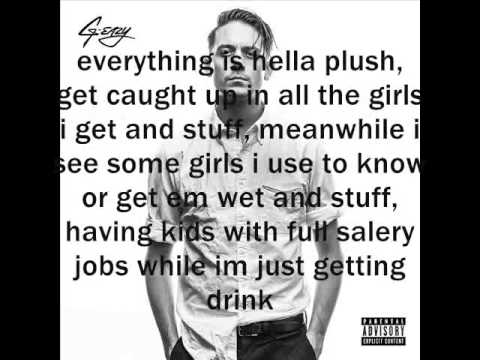 Everything costs something, bro
Winning somewhere, somewhere else you just lost something though
The cost of opportunities is always good to know,
But if you know that then you're good to go
Yeah, no dreams too big
Chase anything you have the passion to do
Only a dream till it happens to you
Finally seeing money now I'm acting a fool
Never thought touring the world all year,
Would be something I might actually do
Friends came through got me so high
I forgot who I was passing it to
Party in a mansion, splash in a pool
Reminiscing 06 back in the school
My whole crew...
Couple of niggas packing it too
Go ahead try to talk shit on me,
I squad up come back with a crew
Call me a bitch see what that's gonna do
Fights in the streets like that shit was cool.

Yeah, we used to do dumb shit daily
Dreamed since I was just a baby
Now I'm here its "fuck you, pay me!"
I just had enough of waiting
I worked hard, they stuck with lazy,
If I stayed I'd have just went crazy.
People change, everything's in constant motion
My old girl's across the ocean
Some stuff fades that's lost devotion.
Some folks stay some come and go
Ain't what you think it's what you know
I must run fast, you're running slow
Smoke! Break down some Kush and roll a Dutch
Right now my vibe's so alive so please
When we smoke just hush
Me and some of those who's closest to me haven't spoken much
Crazy when you learn the cost of blowing up, yeah!
(Are you worthy?)

I know I should keep in better touch, yeah
But that door it never shuts
Even when we chilled I never said that much
Sometimes it be worth the bullshit, sometimes you should let it flush
Yea, but when I'm on tour now I just get a rush
Everything is hella plush.
Get caught up in all the girls I get and stuff
Meanwhile I see some girls I used to know are getting wed and stuff
Having kids with full salary jobs while I'm just getting drunk.
Missing every birthday anniversary
Yesterday my moms got out of surgery
Wasn't even in town.
Shows and after parties what I've been around
Finding out the news late
Imagine how that shit sound
Sit down priorities are all over the place and shit
Stress levels rise and that J gets lit
Try on shoes that Jay Z fit, fuck all that complacent shit
I'm just dropping crazy shit, trying to outdo those fools who think they can spit,
But I can't even lie, all this real life shit is passing me by
Talking to myself and I'm asking me why
Would I feel better as an average guy?
But I know that's just a lie, pour up a glass and get high
... my life, might take a toll on me like I'm asking to die
Going on tour for 6 months, hug moms right after she sigh
Look up, wish me luck when you see that plane pass in the sky
No stress, bullshit gets passed to the side
Working hard to make sure I'mma be the man when I die, yeah!

Hey Gerald I just wanted to leave a message
And repeat just...
You have risen to the peaks of A behavior and creativity,
And it's just the begging Gerald,
And it's going to be your life by the sounds of it, and I'm just so proud
I just wanted to call and sound like my cheery self when I'm happy,
So, anyway, this is just the beginning, you're going to be blown away
And you have your grounding, and yourself and that's so rare
So I'll talk to you soon and play on!
OK sweetie, I love you! Bye-bye!