Lyrics to Miss Me? 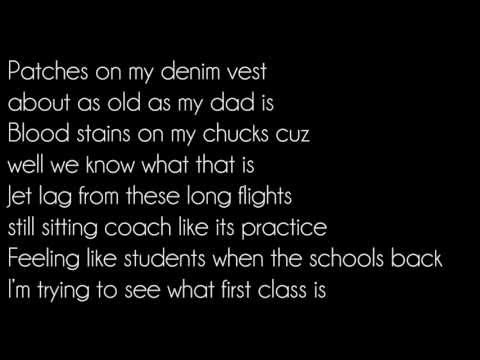 [Verse 1: Machine Gun Kelly]
Cleveland on my back L's up when you see me
Came from the underground now they on tv swear to god haaan
Ain't shit changed
Fool,
You can miss me with that rap shit
You can miss me with that stereotypical "he isn't lyrical" barbershop chat shit
Miss me with that frat shit
Only university I graduated was Hard Knocks
I'm from Cleveland where they trap shit
Five bucks for the catfish, five bucks for the bad bitch
Five bucks in a drought in this city could get you a piece of that cactus
With saran wrap for the wrapping
Whatchu mean?
Meaning we bundling all of this loud into Garcia Vegas
I swear its contagious the way that we passed it
Patches on my denim vest about as old as my dad is
Blood stains on my chucks cus well we know what that is
Jet lag from these long flights still sitting coach like its practice
Feeling like students when the schools back I'm trying to see what first class is
Cash is the root of all evil
But maybe that's why I do bad shit
Fact is, I do what I need
Cuz the country we live in is fascist,
And no Catholic or Baptist, warlord or pacifist, could've seen what I seen without IMAX's and 3D glasses
Yall in family houses like Bob Saget
Both parents
I was on family couches like "you don't want it?" ill wear it
Inheriting hand me downs as a grown man, embarrassed
And these dreams seem far-fetched
When reality is you're sharing a shirt, shower, and shitter while your newborns in the carriage
Packaging groceries in bags for an hourly seven dollar average
This ain't living this is strife, mixed with Hennessey and some sprite
But maybe one day they'll remember me like they remember Mike
When I'm gone
Uh, Kells
Maybe they'll remember me when I'm gone

[Verse 2: Dub-O]
And they say Dub quit with that humble shit
You can only be cool for so long
Don't misjudge I'm not the one you wanna rumble with
Write it down, take a pic
Do whatever you gotta do to remember me
I'm in your memory for infinity
And the same goes for your bitch
Remember me from Kennedy
Or East High on the east side where niggas die over anything
Yeah, Dub-O,
Oh, you ain't know?
I got go, I rock shows, I be calling plays like Flaco,
But I'm so Cleveland its a damn shame
And EST is my damn gang been reppin that since way back and that double X is my campaign
Pop bottles that champagne its Cliquot for the champions now where the hell is my damn ring?
Biatch, celebration for nothing let you believe what you see
I'm in the back but no frontin
7 days out the week I be working I'm full of hunger
That jealousy is the smell of defeat
Remember who told you
I'm gone
Remember me when I'm gone