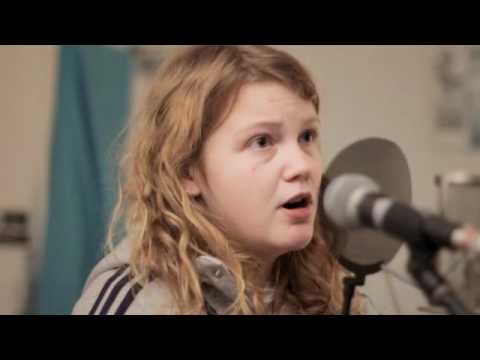 Everywhere is monsters
Tits out, wet-mouthed, heads back
Shouting and screaming just to prove they exist

Industry slimeballs, showbiz big-deals
The cool new band with the retro feel
It's the wrap party for their video
Becky danced in it
The director, Marshall Law
Head to toe in yellow velour
Is holding court about the science of image
While the sycophants giggle and grimace
Becky fidgets, tells herself
Must stop being so cynical
Everybody here is a human
Even these pitiful posturing pop stars and idiots.'
She tells herself to look again -
Nothing is hideous

So while Marshall Law is wanking on about his artwork
She smiles at the guy opposite
Bright eyes, dark shirt
He raises his eyebrows in the direction of Marshall
My name's Becky,' she says
What's yours?'

She was like nothing that he'd seen before
Strong body, soft edges, with something so raw
In the core of her iris
He said his name, Harry'
And never in his life had he felt so happy
They got talking
Free bar. Exhausting decorum
He drank until she was so absorbing
He blanked out the party
The floor spun, he stared at her face and felt sure
Something was happening here

He was kinda nervous
His eyes kept doing circuits of the room
He drank as fast as they could serve him
Then this dude comes over
Sticks out a thick hand
And Harry looks at her
Like he's just found himself in quicksand
He gives this guy a wrap, they shake hands
Sweaty cash passed between palms
No fuss. Bish bash, yes, bosh
He looked at her guiltily
She waved it off, smiling
You a shotter then, right?
I don't care.'

Becky, all I ever wanted was a place of my own.'
His eyes, wide and trusting
He's staring at her, desperate for something to click
He is opening up. This is it
A real classy place, the whole bit
Like a speakeasy, right?
Chandeliers and lights
That shine off of the glasses
No hype, and no arseholes
Instead of rotting our guts out
In shitty old boozers
We can be grown men, listening to music
Real music. Played with heart by real bands
Not just posers looking like they're
Giving blowjobs to mic stands
And I'll be in a waistcoat, dead grand
Harry's Place
Or, at least, that's the plan.'

She was half listening
Half not listening
Kept getting distracted by the lights flickering
He looks like an outline that needs filling in
He leans in close, starts whispering:

The thing is, and it's weird
I never felt so able
To talk like this to anybody, ever
Recently Becky, I've been really feeling the pressure
I can't tell you how good it is
To get this off my chest.'

Becky's holding tight to her glass
Good coke, brain fast
She watches his face as he talks
Little bump on her fingertips
Expert. Quick snort
Sucking on a cigarette, feeling vaguely bored

If I'm being honest, well it is
It's like a trap
I ain't trying to be flash
I just need to raise the cash for the dream
I hardly touch it myself
Look, it ain't that
But once I set myself a task
Well, there ain't no going back
And I am halfway there
I am, nearly, anyway
The point is
I kinda had to push all of my friends away
I can't have nobody
Knowing what I'm up to
I keep it very secret but the thing is
I would love to
Just for one day
You know, live like any other guy
I can't have a girlfriend, you see
Cause I don't like to lie
It's safer all round
That I just keep my head down
And, yeah, the business is booming
Yeah, the business is really booming
But my family think I work in recruitment
So, I get up every morning
And I put a shirt and suit on
And I get on a train, I go up town
It's all professional users
I sell in the boardrooms and not the boozers
To, like, CEOs and these modern day Scrooges
Who get their secretaries to bring me coffee
It's so stupid
Meant to be hard times, right, a recession?
But these guys are buying more than ever, I reckon
And I

He's got nice eyes
Shame about his issues, though
The party pushes on, her cynicism's getting vicious
Show nothing
Keep smiling

She catches the eye of her mates
They're dancing by the bar
They're in a state
Nod for save me'
They understand, dance over
Put their arms around her shoulders -
Becky, we're bored, let's go'
His mouth slows to a stop
He seems to lose his composure
She smiles at him
Yeah, was nice getting to know ya.'

No, not like that, don't leave
Please
Don't make her go, we've just got started

Their teeth are bare, their feet are planted
Their smirking at him like he's dirt
And now his heart is
Damp with the fury of
Finding and losing
This miracle girl
He feels weak with confusion, like
What had he said?
How long had he talked?
He watches them walk to the doors
His blood roars

In the back of the cab, the girls sit there giggling
The driver lets them smoke out of the window
So they're shivering
They pass a bottle of wine back and forth
Let it clash against their teeth
The cab moves fast through the streets
Who was that guy you was with?'
Becky shakes her head softly
Him? I don't know, probably alright
But I could tell he was one of them save me types
And I couldn't be dealing with that
Not tonight.'