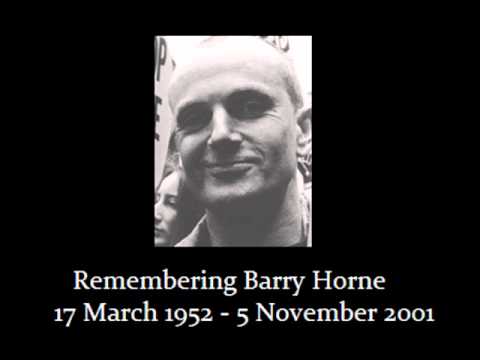 Barry was giving 18 years by a government full of shit
The judge said he's a danger to us all, you are the danger you worthless prick
Laying in the prison cell, thinking what to do next

He can't give up, he won't give up. You know he's gonna do his best.
He's gonna expose the lies, expose the fraud of labours pre election pledge.
They said they would hold a royal commission,
on this barbaric evil worthless vivisection.
Did they keep their pledge? did they fuck.
So Barry was gonna try his luck.

CHORUS
Labour lied, Barry died
He's still with us and by our side.
We won't give up, we won't give in.
In the end we shall win

A hunger strike for 35 days & the government agreed to talk.
A light was seen, but then it went out. Typical of labour to talk not walk
Hunger strike back on, this time for 46 days
again he got nowhere, just more issues to be raised
He knows he's got our support and praise
Another hunger strike followed this,
this time he won't be treated like piss.
A strike until the end this time is best
to force labour to hounour their pre election pledge

Another 60 Days went on but nothing got done
apart from the ALF around the land liberating and having their fun
The media kicked him down, went in for the kill
said he was bluffing, wouldn't go through with it.
I hope they sold a few papers and got their thrill
In the end Barry died in prison
Now there's going to be complete anarchism.
We won't forget Barry Horne
WE WILL LIBERATE WE HAVE SWORN