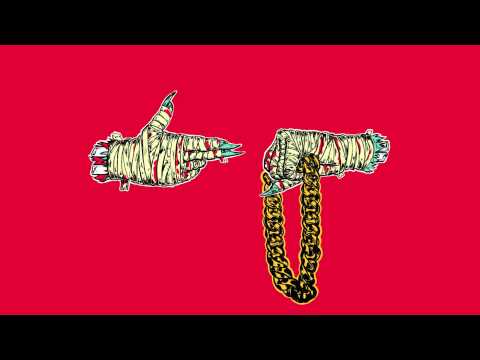 I'm finna bang this bitch the fuck out!
You betta' -- You might wanna record the way you feelin' like history bein' made
This muthafucka put a mirror on the goddamn screen
Let's go, El-P!
Huh? Champ! That's what we're gonna do, Mick

I'm up at midnight, I'm dippin' off in my Nizzikes
A gun and a metal pizzipe, a knizzife is to my rizzight
I'm lurkin' servin' on pussies who lack a purpose
I've got 'em filled up with frizzight like Mizzike is you all rizzight?
I'm lookin' lurkin' on bitches twerkin' for service
The bitch's bag is a Birkin, I'm yellin' screamin' and cursin'
I'm putting pistols in faces at random places like
Bitch give it up or stand adjacent to Satan
Bad man chillin', the villains is here
No Jesuses here, I hear the demons in my ear
And I want it, I need it, see it, I take it
Never fake it, wrap you motherfuckers up, leave you naked
The jewels runners, top tag team for two summers
Live and let live, fuck you cuz, cause that's a fool's honor
I'm walkin' totin' on two llamas
You niggas ass and trash and trash, fuck it, I'm too honest
So fuck you fuckboys forever, I hope I said it politely
And that's about the psyche of Jaime and Mikey
You meet another pair better, highly unlikely
And if I can't rap, then maggot fuck, then fight me
I live for the thrill of the kill, yes it excites me
You know your favorite rapper ain't shit and me, I might be
The closest representation of God you might see
Pay honors like your momma young sonna and take a right knee
The passion of Pac, the depth of Nas, circa nine three
Mix the mind of Brad Jordan and Chuck D and find me
I spit with the diction of Malcolm or say a Bun B
Prevail through Hell, so Satan get thee behind me

I've never been much of shit, by most measurements don't exist
On the radar a little blip in the shadow of motherships
Been smothered and brashly muffled by hucksters of global spin Like the sign on my back says "stab me", my soul is your little bitch
But maybe you should be careful when flipping a stranger's switch Like assuming the war is won ain't a symptom of arrogance
When nothing to lose a step up then everything's for the win
So we grin in the face of frauds and tell monsters to suck our dicks
I live to spit on your grave, my existence is to disgrace you
The kitten became a lion that look at your face like great food
That's why we got the people behind us
While other rappers are vaginas for the fame the jewels runners will always stay rude
Motherfuck your permission, was never yours to begin with
And every bar of the bitch shit you spit is your fucking prison
I been here making raw shit and never asked to be lauded
Run the Jewels is the answer, your question is "what's poppin'?"