It Was A Good Day Lyrics Lyrics

Lyrics to It Was A Good Day Lyrics

It Was A Good Day Lyrics Video: 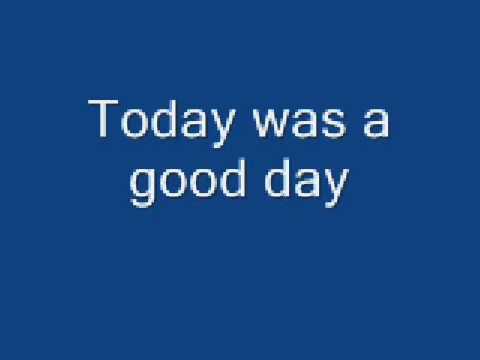 [Verse One]
Just wakin up in the mornin gotta thank God
I don't know but today seems kinda odd
No barkin from the dog, no smog
And momma cooked a breakfast with no hog (damn)
I got my grub on, but didn't pig out
Finally got a call from a girl I wanna dig out
(Whassup?) Hooked it up for later as I hit the do'
Thinkin will I live, another twenty-fo'
I gotta go cause I got me a drop top
And if I hit the switch, I can make the ass drop
Had to stop, at a red light
Lookin in my mirror and not a jacker in sight
And everything is alright
I got a beep from Kim, and she can fuck all night
Called up the homies and I'm askin y'all
Which park, are y'all playin basketball?
Get me on the court and I'm trouble
Last week fucked around and got a triple double
Freakin niggaz everyway like M.J.
I can't believe, today was a good day (shit!)

[Verse Two]
Drove to the pad and hit the showers
Didn't even get no static from the cowards
Cause just yesterday them fools tried to blast me
Saw the police and they rolled right past me
No flexin, didn't even look in a nigga's direction
as I ran the intersection
Went to $hort Dog's house, they was watchin Yo! MTV Raps
What's the haps on the craps?
Shake 'em up, shake 'em up, shake 'em up, shake 'em
Roll 'em in a circle of niggaz and watch me break 'em
with the seven, seven-eleven, seven-eleven
Seven even back do' Lil' Joe
I picked up the cash flow
Then we played bones, and I'm yellin domino
Plus nobody I know got killed in South Central L.A.
Today was a good day (shit!)

[Verse Three]
Left my nigga's house paid (what)
Picked up a girl been tryin to fuck since the 12th grade
It's ironic, I had the brew she had the chronic
The Lakers beat the Supersonics
I felt on the big fat fanny
Pulled out the jammy, and killed the punanny
And my dick runs deep, so deep
So deep put her ass to sleep
Woke her up around one
She didn't hesitate, to call Ice Cube the top gun
Drove her to the pad and I'm coastin
Took another sip of the potion hit the three-wheel motion
I was glad everything had worked out
Dropped her ass off and then chirped out
Today was like one of those fly dreams
Didn't even see a berry flashin those high beams
No helicopter looking for a murder
Two in the mornin got the Fatburger
Even saw the lights of the Goodyear Blimp
And it read, "Ice Cube's a pimp" (yeah)
Drunk as hell but no throwin up
Half way home and my pager still blowin up
Today I didn't even have to use my A.K.
I got to say it was a good day (shit!)