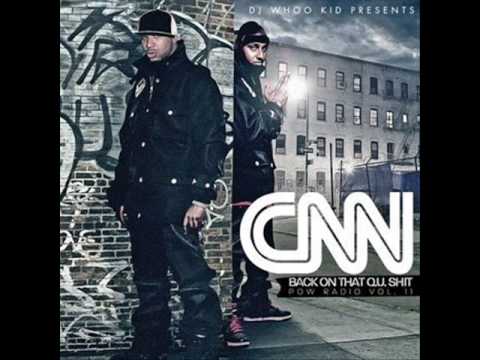 CNN, CNN, Capone and Noreaga, you know what I'm sayin-
The invincible, untouchable, CNN
For all the niggas who keep askin, when CNN gonna do a joint with Premier

Ha, we did it, we here now, y'all niggas can stop askin
Go cop the fuckin album, The Reunion
The invincible, untouchable, CNN (2x)
But right now, CNN and Premier nigga, do it like this nigga

Yo, yo Melvin Flynt drop, my whole collasso stop
I can't believe I fucked up and made a half-ass album
My excuse is, my pops just died, and I ain't wanna make music
My pops just died
My fans stuck with me, my shit still went gold
I got a habit just to drive, gettin head and I roam
CNN, we like the Grand Royal, I write rhymes with the Coke oil
Yo, Apollo heat
See me, sell ??? right with ??? creep
Got out the club, seen the police, ??? deep
I'm like Frank Mathis, see me blow my dough
And any bitch givin head, if she blow I know
Oh no, we had to go see Premo
Taped it up, The Reunion, a brand new cut
Up in D&D, stayin with some rats and some sluts
From the projects, she know we need our welfare cut

Premo, what up man
Yo, I'm not rowdy but I bang niggas and I pop collas
I grind for the top dollars, fight rotweilers
Put my hand on the Bible, tell it to the judge
I'm a lie for my dunn, take it in blood
I'm dot com, I drop bombs, kill ya squad
Live like I'm still in the yard 'til I pop ya god
For my niggas in the Bridge, with the 50 dollar Panasonics and the blank 8's
Who rap chronic collab jake
Whether we have not or have cake
We got gas to get that straight, we movin at a fast rate
My last case I got bail
My first one, man did indicted, how I write it, sister can't stand it
I smoke bud, get pissy, who could flow with me
Staggerin, bang like the wild Aficans
Spit gutter on a Premo beat, for the love of the street
The only child, my little brother was he

Yo, yo, my thugs is bilingual
You see my shit speak Spanish
Disappearing acts make your whole team vanish
From coast to coast I got them things
Badda-boom-badda-bing, he the glorious king
Another album, another plaque, another ounce and another mac
Another chromed out gat
Another place to face where I lace you at
I put all type a wholes in ya face black

Yo, yo, who think I don't got it?
I'm like workin with a bird, I got long product
Give it to you raw, won't chop it
New York niggas is foul, we body sling shit in the val'
Them pregnant fiends, killin they child
I'm the next best thing to "X", oral sex
Brand new tecs, food stamps and welfare checks
I'm the messiah, recognize it, political prisoner
From the projects, I send shots where the cops is, nigga