Lyrics to If Ya Scared Say Ya Scared 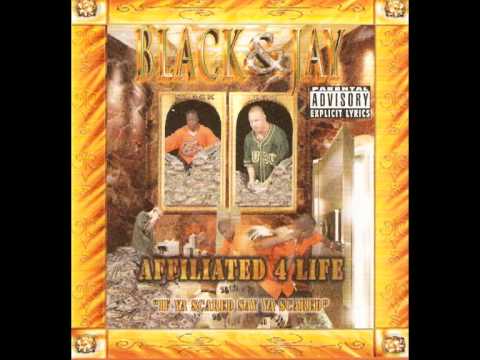 [Black]
Yeah Black & Jay, with C-Loc and Young Bleed,
Sendin' this out to them old scary ass niggas,
Frontin' like they hard, inside them hoes scared

[Jay]
THEM HOES IS SCARED!

Always on beat, Mama told me, be a menace from day one,
Wicked ways, son break free, you as real as they come,
That's for fun, after dark here come the sun, nowhere to run,
Shame before that day I never thought to pray once,
As nine's catch me, some stand dazed while foes laughin' at me,
Right then I knew to change my ways cuz heaven's startin' to get happy,
Askin' where my killers now and hear a sound as I feel the ground,
Waitin' for them fools to move the Locster almost drowned,
As I make my rounds through the hood the guilty hold their heads down,
What you would've did if you could, I don't wanna hear that shit now,
Still got love for you, but it's time to flip the format,
Now I'm in the club hollerin' "Nigga, where the mic at?",
Well you don't like that, I know playa, you ran like a paperback,
Your colors show and now I know there ain't no turnin' back,
Take your counterfeit ways to the grave, you lose your head nigga,
So if you scared say you scared nigga

Heart to heart, eye to eye, nigga man to man,
Here I stand, starin' at'cha with this thing in my hand,
Killer Corleone, like you know, Killer Corleone, not a,
Nigga in the World, I run with thieves like Ali Baba,
That'll take your life,
Trife like a thief in the night,
And use the little bit on money they make, gettin' high as a kite,
Shit gone be alright though, I ain't trippin',
Constantly flippin' but quick to issue niggas ass whippins,
No love for enemies from Baton Rouge to Tennessee,
Me and Black & Jay, sippin' Hennessey say pass it Jay,
Nigga quick to blast away,
Any day, so what now?
Call it what you want but nigga, I don't give a fuck, hanh?
Niggas ain't ready for confetti, four fingers gone like Freddy,
Eatin' spaghetti it's who nigga? Corleone,
I'm home in my own zone, don't cross my path and make me laugh,
Dirty ass nigga, here's your blood bath, ya heard me?
Consider me a soldier of fortune, a hustler,
Quick to take your life while you're checkin' the muffler,
Nigga you fuckin' with a black hand Killa clan, goin' off wit'cha head,
So if you scared, won't you say you scared nigga?

Nigga if you scared, say you scared, look in my eyes you not bout it,
Drop your head or run off, before this shit start gettin' rowdy,
Nigga you scared to die, frontin' like you got heart in this game,
Thought you was a true ass thug nigga, ready to ride and bust thangs,
See how things change when it's time to ride,
oh now your pen allbleedin
No nuts inside the draws, I know his niggas feelin' me,
I'm on this hennessey and weed, strap it up and let's mob,
Get these true niggas off the corner and lets go finish the job,
These niggas that ride they some hoes, inside them niggas really scared
Quick to leave you niggas dead if you heard what I said,
From Tennessee to Baton Rouge, ain't no love for these fakes,
So many niggas that perpetrate, scared to hold they own weight,
Won't hesitate to pull that trigger I look you dead in your eyes,
Regrettin' what'cha ass did, scared beggin' for your life,
You should've thought about it nigga, actin' like you really cared,
Now the shoes on the other foot, go on and say that'cha scared

I ain't scared to die or get high,
I ain't scared to see the bitch bleed,
when it's time to mob I'm gone ride bitch,
And shit done changed cuz when I go to war, you can lose your brain,
Cuz I'm bad from them streets, quick to pull them thangs,
Ain't it a shame? From what respect you get for killin' a nigga?
Because his nuts wasn't bigger, left him dead in his Hilfiger,
How much slicker learn quicker from true Mob figures,
Like Gotti and Nitty, C-Loc and Bleed and Black & Jay on the picture,
Now who's wit'cha? When it's time to kick up dust, when it's a must?
To let them toys bust, over bullshit stuff,
It's rough, and times are hard on these crooked ass streets,
And if you fuck with my clique, we leave 'em six feet deep,
Hellbound and Southbound, like Eightball and MJG lay it down,
From those who wanna clown, we bury they faces to the ground,
I'm on the pitcher's mound, ready to strike the next opponent out,
And if you scared, say you scared, bitch open your mouth