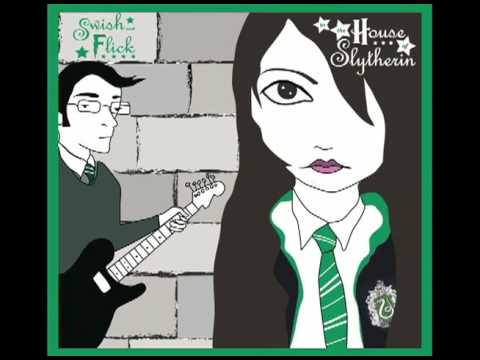 Swish and Flick in the Great Hall, y'all
Rockin' this joint like it's the Yule Ball
Getting drunk on too much butterbeer
Like Harry and the Potters, we'll drink phoenix tears
Put the sorting hat on if you're a first year
And wave your wand if you're glad to be here
To the left, to the left
To the right, to the right
To the front, to the front
To the back, to the back
Now Swish baby, Flick baby
Don't stop, get it, get it

Slytherins in the house say, "Hiss"
And get ill like a dementor's kiss
Hufflepuffs, raise your cups in the air
And get drunk like you just don't care
Ravenclaws in the house say, "Caw"
Shake your (ass) tail like it's against the law
Gryffindors, wave your swords in the sky
And dance around like you don't know why

We're Swish and Flick making hip hop for hippogriphs
Calling out all of you hypocrites
Making money, getting rich like the Malfoys
You know I have a thing for those bad boys
We rock the house at the start of term feast
We can't be stopped, no, we can't be ceased
So raise the roof and the enchanted ceiling
Shout it out, tell me what you're feeling

We're not as big as some other schools
But every witch and wizard knows that Hogwarts rules
The bird, the bird, the bird is on fire
We don't give a Fawkes, just let the phoenix feathers burn
Burn, Fawkes' feathers, burn