Lyrics to Heartfire And Forge 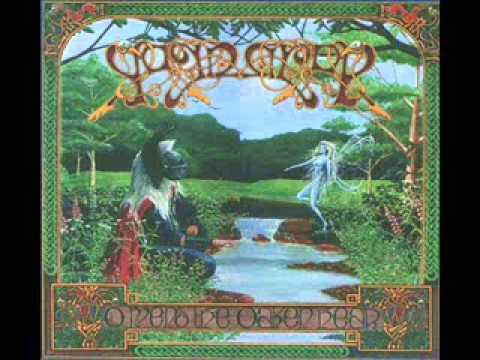 As the sun was rising,
three maidens flew low
from the heights of Asgard
to bathe on Midgard below,
but as they laughed in the water,
their swans plumage cast on the side,
three brothers did find them there
and took these Valkyrs for brides.

Seven winters they rested
with the brothers, bound as wives.
Love's fire burned deeply,
they thought t'would last all their lives,
but eight winters found the maidens
filled with a longing to fly.
On the ninth they once more took their downy wings
and soared to their homes in the sky.

Loss took hold the brothers deeply.
Long they mourned their swan-maids to return in vain.
Gazing to the misty skies from dawn to dusk yet still the sorrow burned, the pain.

Egil and Slagfinn took up their skis and journeyed through frost-winds and Nor-winter freeze.
Searched over ice-realms, searching for love. Steely grey skies rained down Hel from above.
Bleak were the mountains, bleaker their quest for Valhalla's maidens to hold to their breast.
Fruitless their search, fruitless their cost. In black pain of winter the brothers were lost.
Völund alone, the last of the three, did not depart on this hopeless journey
but waited for his sweet Alvit's return. With longing and sorrow for this he did yearn.
A master of forge-work and Svartalf craft, he copied the love-band his sweet wife had left;
a ring of such beauty and intricate shape, til seven hundred together did drape.

Then one night, when home from hunting he returned, he found that Alvit's ring had gone.
Filled with hope that his sweet swan-maid had come back his heart began to sing, but he was wrong.

Völund slept peaceful, twas the first night since Alvit had skyward on swan-winged flight,
yet peaceful his sleep was never to be and soon was awakened by brash reveille.
Shackled and bound before Nidud the king, the lord of the Swedes had taken the ring,
now also the sword, the smithy's fine blade, forged in magic, with spellcraft inlaid.
Völund was led to a neighbouring isle where, humstrung, the captive was forced to toil
crafting the weapons and trinkets and rings with hammer on anvil as forge-bellows sing.
The fire in the furnace which flashed from the grate was matched by his rage and matched by his hate.
The anger and angst was alll he could bear, the smithy was racked with pain and despair.

Sorrow was deep, the nadir of life.
Gone was his freedom, [and] gone was his wife.
And yet, still was hope.
Though crippled and wan
the fire of revenge
would forge in bloodlust's gory plan.

Midst the pauses in his labours forged a span of gold and shining wings like his wife's,
and through cunning switch reclaimed the sword of magic temper from the king.
Now revenge.

Völund had waited and bided his time, now Nidud the king would pay for his crime.
Into the forge his sons were enticed and soon lay so cold, bereaved of life.
Their skulls set in silver fine chalices made and were off'd to the king for the drinking of mead;
their eyes and their teeth, fashioned as gems, Bödvild the queen hung at breast as at hems.
Donning his wings, the smithy did fly out of the forge and into the sky.
Circled the palace and crowed of his deeds, his vengeance complete, his torment now freed.
Then onto, Alfheim where Alvit he found and. As smith of the gods, his glory was bound;
his magical sword in the Branstock was cast by Odin for Sigmund, its fame to e'er last.

And Altheim rings with laughter.