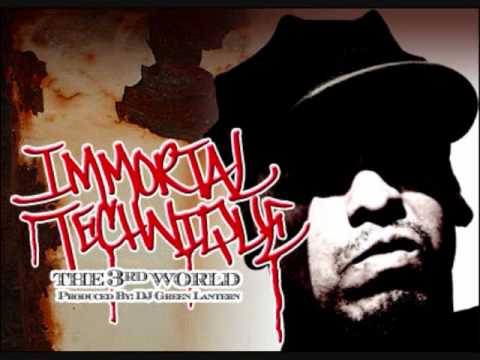 "Let me welcome both of you
uh, to the show this morning to talk about what I consider
to be a very very important topic, uh, the Harlem Renaissance
But before we get into that..."

Harlem once was red line district rated (uhh)
Designated ghetto like the yellow star of David
And you wonder why, people don't own they homes (why?)
Cause the racist bank wouldn't fuckin mortgage a loan
Until after the invasion of, gentrification
Eminent domain intimidation, that's not negotiation
And it's frustratin to look at, every day
Like watchin a porno, on 56-K
Biohazard labs instead of store rooms
What's next motherfucker, projects as dorm rooms?
You ain't fool nobody in this community duke
With your little fake Manhattanville community group
Ivy league, real estate firms are corrupt
I lay siege to your castle like the Moors in Europe
They treat street vendors like criminal riff-raff
While politicians get the corporate kickbacks (snakes)

[Chorus: Immortal Technique]
Harlem Renaissance, a revolution betrayed
Modern day slaves thinkin that the ghetto is saved
'Til they start deportin people off the property
Ethnically cleansin the hood, economically
They wanna kill the real Harlem Renaissance
Tryin to put the Virgin Mary through a early menopause
The savior is a metaphor for how we set it off
Guerrilla war against the re-zoning predators

[Immortal Technique]
When I speak about Harlem, I speak to the world
The little Afghan boy, and the Bosnian girl
The African in Sudan, the people of Kurdistan
The third world American, indigenous man
Palestinians, Washington Heights, Dominicans
Displaced New Orleans citizens
Beachfront Brazilian favelas that you livin in
The hood is prime real estate, they want back in again (fuck outta here)
I didn't write this to talk shit, I say it because
some of y'all forgot what the Harlem Renaissance was
We had revolution, music and artisans
But the movement was still fucked up like Parkinson's
Cause while we were givin birth to the culture we love
Prejudice, kept our own people out of the club
Only colored celebrities in the party (fake nigga!)
And left us a legacy of false superiority
W.E.B. Du Bois versus Marcus Garvey
And we ended up, sellin out to everybody
The Dutch {?} and the John Gotti's
Banksters, modern day gangsters, immobile army
They wanna move us all out the N.Y.C.
Like they did to the Jews with the Alhambra decree
So support your own businesses and do the knowledge
Cause the real Harlem Renaissance is economic (yeah)

"When they were saying it is the renaissance, of Harlem
they didn't mean, that we had stake in that
They meant to say that they could make money out of us"

"They are coming in with all kind of prejudices
In Brooklyn they're doing the same thing
In, um, Queens they're doing the same thing; the Bronx
There's hardly any place which is affordable
I mean these people are putting up condominiums
which start from a million dollars
How many people in this community make that kind of money?
How many people have that kind of money?"

"People of Harlem, they are the natural allies of the oppressed people
of the world, whether the struggle is in Panama, in Africa, Cuba"

"We spend money with the wrong people
We are looking for love, with people who don't love us
What's wrong with us loving each other
and making sure that we are protected?"