Lyrics to Eye For Eye 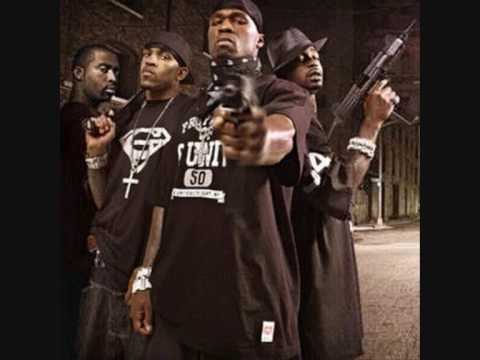 [50 Cent] Yeah, I like the way this feel This make me wanna just (G-G-G-G, G-Unit!) Buck somethin, hahaha (G-UNIT!) [Chorus: 50 Cent] Nigga you shit on me, I shit on you You put a hit on me, I put a hit on you An eye for an eye nigga Survive the shots or die nigga [50] Get 'em Banks! [Lloyd Banks] They can't hold me I'm Lloyd Banks the one and on-ly Not your buddy, not your pal, not your ho-mey But ain't a government around that can control me Oh no!!! [Lloyd Banks] Uhh, I'm on that "Doggystyle" shit, man I don't love a hoe Poppa wasn't 'round, so I had to let my brother know Never stay at center, play the back and let your money grow Most them niggaz wouldn't be around if you was bummy yo Southside Jamaica neighbor yeah that's where I come from If you see a nigga with me then there's more than one gun Fly straight soldier, ain'tcha tired of bein the dumb one Or are you satisfied bein another nigga's Dun-Dunn We all know friendships turnin sour when you gettin it Some niggaz hate me in the hood, but I don't owe them niggaz shit Smilin all up my face like I don't know them niggaz sick But I can care less, I'm on the Island and I'm gettin rich [Chorus] [Young Buck] Walk it and talk it, spit it how I live it nigga Came from the country, Dirty South get it nigga Feds try and question me, they run up in my ho-tel They said there was a shootin, but they found no shells New York City hell they throwin niggaz under jails I got love for dem and I ain't even from dere Now bust a shot for dem boys on da block I can feel your pain nigga, I'm still in the game nigga There's somethin bout the sound of a trey-pound That make me pull up, hop out, and make a nigga lay down See every time we 'round, you hear some shots go off And niggaz get they chains snatched when they tryin to show off Shootouts in broad day, we do it the mob way And come to find out, these niggaz softer than Sade' I'ma keep livin my life with a pistol in my palm And a wrist full of ice, you can call me a Don motherfucker [Lloyd Banks] We got the Hei-ny So make one wrong move and you're dy-ing Ain't no time for coppin a plea and cry-ing Cause my niggaz ain't gon' stop ridin' So you gone [Chorus] [50 Cent] I got a handgun habit, nigga front I'll let you have it When the shots go off, cops sayin 50 back at it I'm allergic to the feathers on these bird-ass niggaz (yea) Front and I'll put your brains on that curb fast nigga I ain't a marksman, one spark and I spray shit Nuff rounds from that H-K, I don't play bitch (uh-huh) Move like I'm militant, back on that gorilla shit Moody, disrespectful, unruly, but niggaz can't move me (yea) I squeeze 'til I run out of ammo, if it's a problem it's handled I have your people pourin our liquor and lightin candles You fuck around I blow your brains on my New York Times Run home, turn to the sports section and read your mind It's crystal clear, you should feel when that gat bust First there's crime scene tape, then you end up in that black hearse We don't go to funerals, but we'll go to your wake fam Do your body all banged up, you made a mistake man [Chorus]