Make Do And Mend

Lyrics to Ever Since 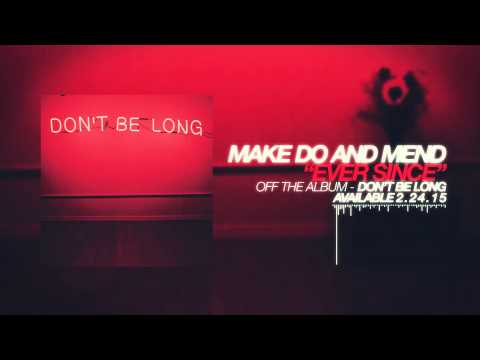 Measure the moments by the almost and the came close,
by the "What the fucks?" and the "I don't knows"
because soon they're going to notice the space between us starting to show.

We played the songs with all the wrong notes,
played 'em too slow to the empty rooms where your friends don't go
because they don't need to know that there's nothing good that doesn't implode.

But I know that we don't have the strength to let it go.

If there was a way to fight a decade's slow decay,
there'd be no telling how the sadder songs would play.
I'm just so sick of the words, sick of the feelings they can't relay.
There's only so many ways you can burn out and drop off the earth's face,
fuck off and fade away.

Keep it down or drown it out;
it all gets swallowed anyhow.
If there was ever a high road they washed it out.
It's haunting how it all comes back around.
Because you can't turn the tables if they put nothing down.

But you know that we don't have the strength to let it go.

Tell me, have I been a fool?
Was it something I did or I didn't do?
Was it something you saw in them that I was staring through?
I guess we had it to lose, but that just makes it harder now that it's through.
You chose the other side of a mountain I can't move.