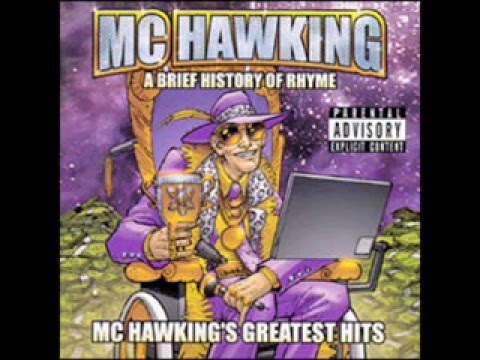 Harm me with harmony.
Doomsday, drop a load on 'em.

Entropy, how can I explain it? I'll take it frame by frame it,
to have you all jumping, shouting saying it.
Let's just say that it's a measure of disorder,
in a system that is closed, like with a border.
It's sorta, like a, well a measurement of randomness,
proposed in 1850 by a German, but wait I digress.
"What the fuck is entropy?", I here the people still exclaiming,
it seems I gotta start the explaining.

You ever drop an egg and on the floor you see it break?
You go and get a mop so you can clean up your mistake.
But did you ever stop to ponder why we know it's true,
if you drop a broken egg you will not get an egg that's new.

That's entropy or E-N-T-R-O to the P to the Y,
the reason why the sun will one day all burn out and die.
Order from disorder is a scientific rarity,
allow me to explain it with a little bit more clarity.
Did I say rarity? I meant impossibility,
at least in a closed system there will always be more entropy.
That's entropy and I hope that you're all down with it,
if you are here's your membership.

Defining entropy as disorder's not complete,
'cause disorder as a definition doesn't cover heat.
So my first definition I would now like to withdraw,
and offer one that fits thermodynamics second law.
First we need to understand that entropy is energy,
energy that can't be used to state it more specifically.
In a closed system entropy always goes up,
that's the second law, now you know what's up.

You can't win, you can't break even, you can't leave the game,
'cause entropy will take it all 'though it seems a shame.
The second law, as we now know, is quite clear to state,
that entropy must increase and not dissipate.

Creationists always try to use the second law,
to disprove evolution, but their theory has a flaw.
The second law is quite precise about where it applies,
only in a closed system must the entropy count rise.
The earth's not a closed system' it's powered by the sun,
so fuck the damn creationists, Doomsday get my gun!
That, in a nutshell, is what entropy's about,
you're now down with a discount.

Hit it!
Doomsday, kick it in!