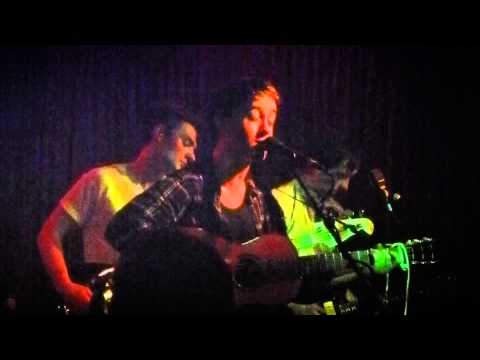 And when he finally broke up, he found that he'd been breaking down
Little body, little soul, little shrapnel on the ground
And so he started to examine from the clumsy to the cute
From the fat, fat cat to the destitute
From the chat fat cat to the mute

Then suddenly he found himself in 1822
And he was in another body in a heavy sort of suit
He was surrounded but he'd started making plans to make a run
When they called to him, "Son, cock your gun..."

And so he did as all the others had already done
He put his finger on the trigger and he got 'em some
But though we don't like to admit it, it was sensual and pure
And he changed that day, though he can't be sure
If it's the sickness or the cure

As she inquired about the reason for his visit here today
Well he just said, "No reason, and I really shouldn't stay"

And so he thought she would think that he was some kind of freak
And that he'd go back to the grind, and that he wouldn't last a week
But she didn't, she just sighed and added softly with a smile "Sit down, dear child, what's on your mind?"

And so he frantically described to her the kingdom at her feet
As she continued with her manicure and poured another tea
As he was recounted tales of misery and suffering and pain
She was yawning at the ceiling, so he had to up his game
The only thing that children cherish is to move up the ranks
Lucifer is in our court, Beelzebub is in our banks
And if you don't cooperate with us, we'll hound you till you're dead
So she granted him a wish and let him write it on her head
And when he read it back to her, this is all it said: