Lyrics to Cows With Guns 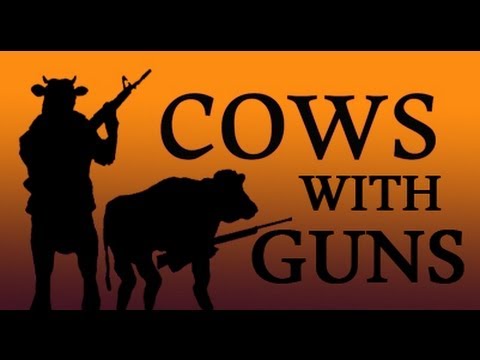 Fat and docile, big and dumb
They look so stupid, they aren't much fun
Cows aren't fun

They eat to grow, grow to die
Die to be ate at the hamburger fry
Cows well done

Nobody thunk it, nobody knew
No one imagined the great cow guru
Cows are one

He hid in the forest, read books with great zeal
He loved Che Guevera, a revolutionary veal
Cow Tse Tongue

He spoke about justice, but nobody stirred
He felt like an outcast, alone in the herd
Cow doldrums

He mooed we must fight, escape or we'll die
Cows gathered around, cause the steaks were so high
Bad cow pun

But then he was captured, stuffed into a crate
Loaded onto a truck, where he rode to his fate
Cows are bummed

He was a scrawny calf, who looked rather woozy
No one suspected he was packing an Uzi
Cows with guns

They came with a needle to stick in his thigh
He kicked for the groin, he pissed in their eye
Cow well hung

Knocked over a tractor and ran for the door
Six gallons of gas flowed out on the floor
Run cows run!

He picked up a bullhorn and jumped up on the hay
We are free roving bovines, we run free today

They crashed the gate in a great stampede
Tipped over a milk truck, torched all the feed
Cows have fun

Sixty police cars were piled in a heap
Covered in cow pies, covered up deep
Much cow dung

Black smoke rising, darkening the day
Twelve burning McDonalds, have it your way

The President said "enough is enough
These uppity cattle, its time to get tough"
Cow dung flung

The newspapers gloated, folks sighed with relief
Tomorrow at noon, they would all be ground beef
Cows on buns

The cows were surrounded, they waited and prayed
They mooed their last moos, they chewed their last hay
Cows out gunned