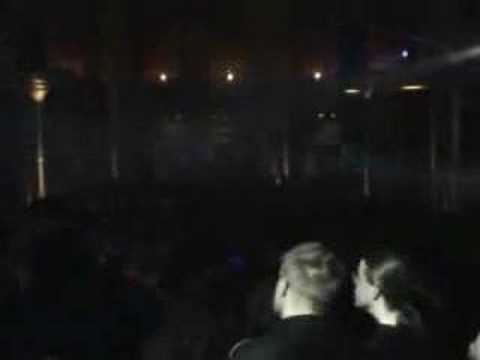 The idea to write this piece of
buffoonery came to us recently,
after the situation concerning our

band, little by little started getting
more and more stressful as well as
chaotic due to an external
campaign designed to damage and
even sabotage the activity of the
band.

Real propaganda in every sense
against us and totally based on
biased falsities would like to inform
our fans and people in general that
Kirlian Camera indeed, is a
neo-nazi and racist band.

Even from the beginnin of our
activity with our present name
there were inherent problems but
recently the "democratic hand" (or
at least presumed so) which is
hostile towards us has shown an
admirable determination in trying
to spread informations which can
harm us.

It is clear that we are fed up of
being considered "criminals" by
various political groups who flaunt
traditions of democratic struggle
as well as vast cultural knowledge
but are not even able to report
precise news about us, in fact they
choose, wich success the way of
pure defamation.

It is strange to think that all this
happens without any checks and the
first people to be amazed by this are
ourselves and our public. It is
strange to think that this "New
Holy Inquisition" is supported by
very notable entities such as the
large circulation media, but all of
this is happening and there are
no doubts about this.

The need to write this strange and
unusual communiquè is therefore
the result of the negation of our
most basic rights, among which the
right to free speech, since almost
nobody agrees to let us refute the
declarations about us, denying us
space in the media which is instead
only allowed to our opponents.

Let's look at a few examples... In
edition 17 of the German weekly
"Der Spiegel" on sale from the 26
April 1999, four pages were
dedicated to the Littleton massacre
in Colorado which happened in
spring this years where two students
called Dylan Klebold and Eric
Harris killed twelve of their school
mates and wounded a number of others.

One can understand the interest of
various media and information
organizations. What is not so
understandable however, is the fact
that a certain German sociologist
called Alfred Schobert, once
interviewed by Mr. Martin Wolf,
declared that the members of
Kirlian Camera go around blissfully
giving nazi salutes in public and
spreading propaganda on the
subject.

Mr. Schobert seems intent on
demonstrating that bands like ours
are to be held at least partly
responsible for events such as the one
in Littleton and makes false
statements in a major national and
international publication like "Der
Spiegel", which in turn denies via fax
the right to reply of one of our
external representatives who asked
for the possibility to refute such
statements.

The reason for this refusal seems to
come from the fact that several eye
witnesses claim to have seen us give
"nazi salutes" in public. This is not
possible, since a fact of this kind has
never occured, and what's more, the
use of the plural form would tend to
involve all members of the group.

It may have happened only in a
couple of occasions that only Angelo
Bergamini showed a "salute"
indicating belonging both to the
extreme left as well as the extreme
right, not to mention various
religious doctrines and in particular
the Christian one.

Someone might have noticed
something in the beam and hand
motion above the beam which occurs
when one wants to modulate the
sound of the Roland MC-505
synthesizer (which has a device
which is similar to the old Theremin
on it).

This is a confused movement which is
similar to the gesture in question, but
it is beyond any doubt that no nazi
salute has ever been given on stage.
What Mr. Schobert and his friends are
trying to demonstrate is very serious.
Very serious indeed because it is
completely distorted and truly
persecutory.

We are not here to apologize or to
profess a political faith, rather we
are here to formally ask that these
people be limited in their attemps,
carried out in bad faith; therefore
we are also here to claim the right of
the public to unbiased information.

Those who have been asking us for
for awhile to take a definite political
slance to calm the ever increasing
number of accusations and threats
(even death threats) against our
band. No, we are not here to take a
stance since the right to a secret vote
exists and every citizen can exercise
this right in a country presumed to
be democratic.

We would not like to discover that for
KC this right has been denied. Indeed,
we do not think that our political
beliefs (if they should exist) are
relevant and we repeat our intention
to demonstrate that an "official
position" in one direction or another
is not our obligation, and this should
not lead to us being considered racist,
as other self-proclaimed
"democratic" organizations would
like to happen.

Not long ago, on the 2nd of August
1998 we held a concert in Berlin and
we were informed that a person from
a radio station (whose name we still
don't know because of the usual
accomodating silence) had
encouraged the listeners not to come
to our show as we were to be
considered "neo-nazi and racist"
again.

Our singer-collaborator and friend
Nancy Appiah (pseudonym of Grace
Osei) who is dark skinned and was
born in Ghana doesn't understand
much about European politics but
she knows that nobody in this band
has ever shown her a lack of respect
or given her problems because of the
ethnic race she belongs to.

She has played with us live and
recorded with us in the studio, even
appearing a few times in our official
group line up, as photographs could
demonstrate. It is therefore strange
that nobody has ever noticed her!
Yey, at present, we are one of the
very rare European groups, in our
musical area, which works with a
"coloured" collaborator also when
playing live.

Maybe we are the only ones at
present. Why, therefore, do those
interviewers who ask us leading
questions about our presumed
racism, almost never remember
Grace and the fact that our in
"incriminating track" called
"Erinnerung" we sing lyrics by the
Jewish-German poet August
Stramm?!?

Let's say there existed a case of us
being extreme right-wing... But how
have we shown ourselves to be
intolerant, racist and anti-semetic,
since even our ex-guitarist /
keyboard player Paul David Sears,
involved officially with the band
from 1982 to 1985 was Jewish, as
was our ex-producer Allan
Goldberg who worked with us from
1982 to 1987...?!?

Could it be that they are all
masochistic?!? In KC there has
always been space for any race or
ideology without any restriction. We
have always demonstrated in a
concrete sense, how people with
different ideological views and from
different races can live together and
actually have a close relationship
based on true respect and friendship.
We have been one of the few to be so
active in this sense.

Therefore, we were a little surprised
by the anti-KC demonstration held
in Utrecht in Holland at the end of
October 1997, where we had gone to
play. Somebody told us that it had
been organized by the antifascist
organization "Antifa", but
personally we wouldn't be in a
position to confirm it.

The above-mentioned organization
may do it themselves since it seems
that wherever possible... they try to
sabotage our concerts, circulating
strange declarations about us via the
various channels of information
available today, eg. e-mail, fax, etc.
Clearly, we give the Antifa
organization the possibility to reply
or explain better and confirm the
suspicion that we may be part of an
extreme right-wing organization.

If we were to have this reply, then
we could be aware of all the
so-called crimes committed by us,
and if they were to be revealed once
again to be inexistant, then maybe it
would be the case to point out, even
legally, that someone is really going
beyond the limits allowed by the
law, assuming that at this point
someone still cares about what the
law says, as we are tempted to think.

Once again antifascist organizations
are threatening the peaceful
progress of our European tour in
Autumn of this year and already one
can see the first results: our
appareance at the Duer festival
(Belgium) which should have taken
place on 10th July 1999 was
cancelled due to fears about public
disorder.

If this were true, one would be facing a
veiled... threat, so we will try to shed
some light on this umpteenth little
alarming chapter. The fear to find
oneself in front of a worrying and
sinister enemy must certainly have
prompted the article by a certain
Fabrizio Marcheselli in the Italian
daily newspaper "Gazzetta di Parma"
published on 8th January 1998, where
one gets the sensation that KC are
actually, a neo-nazi band.

Marcheselli, after an interview
based on questions to Angelo
Bergamini, carefully omitted certain
points made by the group member
concerning three directions like
Babenko, Visconti and Fassbinder
(who they have never been fascists
and, on the contrary, have often
showed appreciation of left-wing
politics).

These points were of real
appreciation. Once again, the videos
projected by us during the
performances turned out to be to
worrying politically, with their
quotes of Tarkovskij, Pasolini, Leni
Riefenstahl, Liliana Cavani and
others, and by the various film clips,
including even a well-known top
model, probably considered by some
to be the reincarnation of Eva
Braun!

We apologize to whoever has bought
this CD for deciding to insert this
information in what should be, in our
opinion "a normal means of
spreading music", but there was little
alternative choice since very few
people give the space to reply in, as
already mentioned. Maybe it's better
if ideas circulate and people don't
accept "the silence game" to which it
sometimes seems we are condemned.

We know that seldom, has a group
before now, opted for such a radical
choice and we accept responsability
and we will face the consequences,
however damaging they may be for
the existence of Kirlian Camera
itself. But we want our public to be
aware of what is happening and
finally know the reason why
sometimes they have to go home
without our concert having taking
place.

If they told you that we had measles
you mustn't believe them unless we
subsequently confirm it ourselves.
This communiquè therefore seeks to
represent a particular stance taken
and a declaration of war (not bloody)
against whoever is organizing the
latest inquisitions, and restate the
right to respect for any political or
religious orientation as well as
whoever adopts a position,

or to express the concept better,
"for who takes positions which are
not tolerated by the Modern
Inquisition". This war started a
long time before us. This
communiquè is a declaration of
adhesion to that war.