Cledus Went Down to Florida Lyrics

Lyrics to Cledus Went Down to Florida

Cledus Went Down to Florida Video: 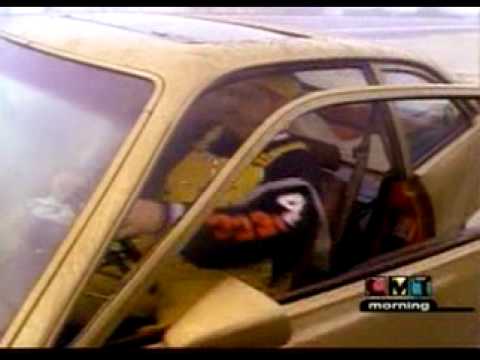 Cledus went down to Florida, he was lookin for a car to steal.
He was in a bind, ten payments behind so the bank repoed his wheels.
When he came across this old man down at Jalopy's Used Car lot.

Then Cledus jumped up on the top of one and said:
"Fella, let me tell you what."

"I'm not gonna be proud of the deed I'm 'bout to do.
"With no time to spare, I gotta be somewhere,
"So I'm gonna steal a car from you.
"Now I've seen your selection here and I admit the pickin's are few.
"I know the Pinto's gold but consider it stoled,
"''cause I got a show to do. "
The man said: 'My name's Jalopy," as he gave an evil grin.
''cause he knew that car wouldn't get too far 'fore the motor blew up again.

Cledus, you better hit the road if you're gonna be a star.
The show's way up in Georgia and you're opening up for Garth.
Your future's riding on this shiny Pinto painted gold.
And if you're late, it's Jeff Foxworthy's show.

Oh, gosh a Pinto, my foot. It drives more like a horse and buggy. Durn.
Cledus said: "No way in heck you're gonna open up that show."
Then fire flew from the manifold as his right front tyre blowed.
And he pushed that wreck across the street and man was Cledus tissed.
And he tried and tried to start her up but it sounded something like this.
Come on. Come on.
Oh Gawd, I'm in a mess what am I gonna do.
My one big shot for Garth Brooks .
Oh durn it.

When Cledus opened up the hood he said: 'I'll be a son of a gun'.
And didn't long to figure out why the heck it wouldn't run.

Fire from the engine, lots of smoke.
He can already hear them redneck jokes.
Dead blamed oil pan laying in the road.
Will he make the show, heck no, heck no.
Whoa oh.

Taxi! Greyhound! Yellow cab! Somebody!
I'll show him a redneck.
He'll have a redneck when I get my hands around his throat.
I'm sick of it.

Cledus shook his head as he watched Foxworthy's show.
And he heard him joke of how he passed a burning gold Pinto.
Then later on, Garth told Cledus: "you'll never get the chance again,"
As he gave the check to that durned redneck who drove a Mercedes Benz.
He said: "Tough break, big guy.
"Before I go would you like to hear another redneck joke'
"Did you know I got my own TV show'"
Well, does anybody watch it' (No, heck, no.)

Well, you might be a redneck if your mom and daddy cathes you out behind the barn.
Whupping Jeff Foxworthy for talking about rednecks all the time.
Aw, shoot I'm just kidding, Jeff.
I wished I could be your best friend.
Do ya like me'
I'd love to be on your TV show.
Come here to me.