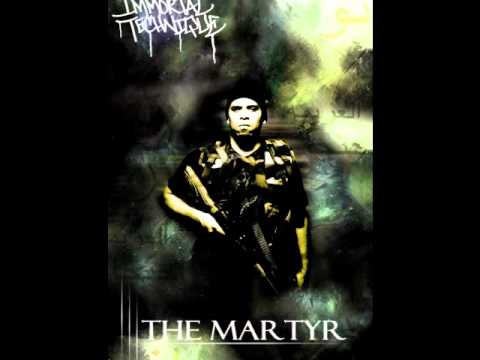 [Verse 1: Immortal Technique]
The ghetto is like a prison with invisible bars
No matter where you at, it always follows you where you are
And it's hard out there for a pimp to get out of
But it's harder for the hooker that he beat the shit out of
I got niggas underground in the confederate states
I find it [?] running the slavery that prison creates
So I never hate on the South: I respect their vision
I just hate on niggas that promote Samboism
And white execs that love to see us in that position
They reflect the stereotypes of America's vision
They want us dancing, cooning and hollering
Only respect us for playing sports and modeling
More than racism: it's stay in your place-ism
More people are trapped in practical blackface-ism
So fuck a Civil War between the North and the South
It's between field niggas and slaves that are stuck in the house

[Hook:]
Civil war for the soul of a nation
This is a struggle to save civilization
Demonstrations overthrowing the occupation
The annihilation of mental colonization

[Verse 2:]
Crip niggas, Blood nigga, eses, Asians
Why the fuck we warring with each other's population?
If you ever wanna dead all our population
People in [?] nation, why the separation?
Why we got Jamaicans hating on Hatians?
When the British and French raped both nations
Mexicans and Blacks kill each other: straight hating
While the government profits from prison population
If you on the bottom, be you Anglo or Asian
You gotta understand the realness of what I'm saying
You gotta recognize another G at the enemy
When the police ride, they fear us frequently
We gotta make you see where the truth be
If you a G, then go and develop GD
50 years of gangs and our people still poor
If we running from the streets we should really end war

[Verse 3:]
Our hearts were torn apart just like y'alls was
Watching towers full of souls fall to sawdust
Everytime we called your office you ignored us
Now you holding hearings all inside of Congress
Microscopes on us, ask if we're jihadists
My answer was in line with all of the Founding Fathers
I think Patrick said it best: Give me liberty or death
I shall never accept anything less
You claimi innocence
You say you're victimless
But you gave the kiss of death in the name of self-defense
Slavery and theft have brought our nations to the end
Pacify your citizenry with success
We believe in freedom, justice, security
But they're only good when applied universally
Certainly if I rage against the machine
My aim was only to clean the germs out of the circuitry
Heard you need putting fear inside your heart
Make you burn Qu'rans and tell me not to build a mosque
Me, my wife and babies we ain't never made jihad
We just want to touch our heads to the floor and talk to god
Ask him to remove every blemish from our heart
The greatest threat abroad doesn't come from any bomb
The moment you refuse the human rights of just a few
What happens when that few includes you? Civil war