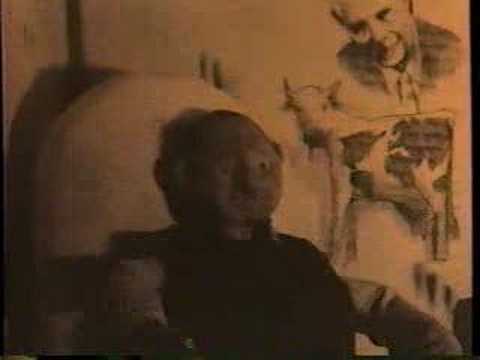 It was a morning just like any other morning
...in the Sinai Desert
...1200 B.C.
It glistened, it glowed, it rose from the gold of the children of Israel
(and most of the adults)

Woe to you, proud mortal!
Secure in your modest digs
You think you're immune?
You, who couldn't finger said cow in a police line-up with the three little pigs?

Cash Cow--Master of Disguises
Who's gonna change shape at will?
Who's the eye in the pyramid on the back of the dollar bill?
Who loves power lunching from Spago to the Sizzler?
Guess who's coming to dinner?

Who loves you, baby?
Who'll give you good credit?
Who says you'll regret it?
One yank on that udder
Will land your butter
In a sling
First one's free
Cow junkies take heed

Cash Cow, coming to getcha!
Why?
Because you think this is stupid, don't you?
The Cash Cow will not be mocked!
The Cash Cow's planning a coup!
The Cash Cow chews cud bigger than you!

Woe, woe, woe to you who blow off this warning
Perhaps you've already been licked...
I, too, was hypnotized
By those big cow eyes
The last time I uttered
Those three little words
"I deserve better!"