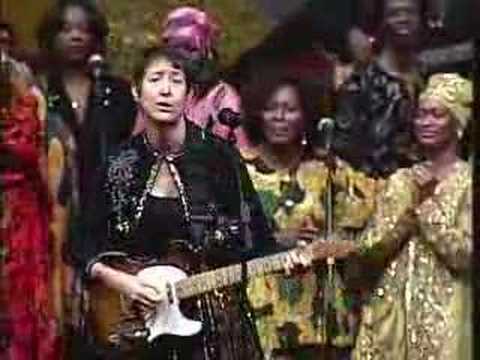 Sister Cindy used to be a disco queen 'Til she come to Jesus and now she's saved Out on the West Mall with old Brother Jed Now she's fighting the Holy War The Campus Crusade Every Spring they seem to invade Oh my God, it's the lunatic fringe on parade (Here's what she'd say now) She'd say "I too used to be a sinner I was a whore among whoremongers I was promiscuous, I used to sniff cocaine But I live that life no longer Brothers and Sisters, I met Brother Max Lynch and he took me home Oh, he was a perfect gentleman Why, we talked about Jesus all night long The next day I got baptized, washed of my sins Now you who are sinners and won't repent you're going straight to hell Cast in the lake of fire" (And on the subject of wailing and gnashing of teeth Sister Cindy did not easily tire) She'd say "You must forsake your earthly desires You must pray for the day that Satan retires" (I didn't get it either) And then it was Brother Jed's turn to testify Out with the sermon on 'Rock Stars in Hell' Now can you imagine John Lennon singing "Imagine there's no heaven"? Hendrix 'experience', oh he shuddered to tell And then out with the sermon on the Middle East And he sets on the ground these Dixie cups He says, "These are the Arab states when Zion returns" And then he proceeds to smash 'em up Yep, he'd crush each one of them Dixie cups with a spiteful god's vengeance He gives a twist of the foot to the Dixie cup that was Palestine Well, the Middle Eastern students in the crowd They choked with rage and rushed to charge the infidels The campus crusaders wrapped their sermon up mighty quick "You whores and whoremongers, you're going straight to hell" Knock, knock (Who's there?) Armageddon (Armageddon who?) Arm a geddon outta here I'm gonna jump headfirst into that lake of fire Sister Cindy, Brother Jed, I'm forced to tell 'Cause with the likes of you campus crusaders up in heaven I think hell is gonna be just swell