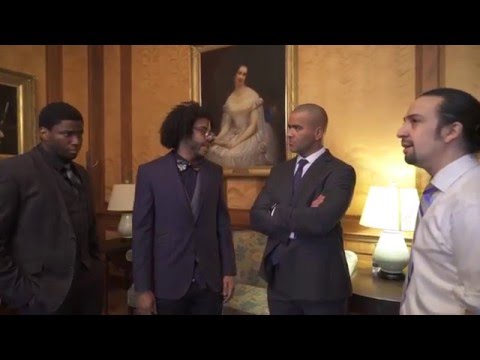 The issue on the table: a petition from a Quaker delegation in Philadelphia calling on Congress to end the African slave trade and abolish slavery, in all its forms. This petition was written and signed by Benjamin Franklin, it cannot go ignored. If this comes to a vote in Congress, what is the White House's position? Secretary Jefferson, you first. Tread lightly...

Sir
The constitution clearly states
That the states have to wait
Until eighteen-oh-eight to debate
On whether to end the slave trade
And whether or not you want it, guys
That is the final compromise we made

But for a second let us say that we can legislate
Unanimous emancipation, freedom reigns, and yes, it's great
We cannot cure prejudice or righteous, desperate hate
So back to Africa or do they get a separate state?
In 1784, I tried to float banning slavery in the West
My notion didn't get a single vote
Slavery's a sin, it's growing like a cancer
But we can't address the question if we do not have an answer

Is it my turn? Good
Plantation states are packed with promise makers
Do you realize the precious time these legislators wasted?
Institutionalizing slavery only multiplies our troubles
Wait till the 1800's, and their population doubles
You all know
This is the stain on our soul and democracy
A land of the free? No, it's not, it's hypocrisy
To subjugate, dehumanize a race, call 'em property
And say that we are powerless to stop it, can you not foresee?
Sir, even you, you have hundreds of slaves
Whose descendants will curse our names when we're safe in our graves
How will the south find labor for its businesses?
How will Thomas Jefferson find his next mistresses?

Yet still, people follow like lemmings
All your hemming and hawing, while you're hee-hawing with Sally Hemings

Well you asked how I feel
I don't pretend to know the answer, but the question is real

If I may, Mr. President?

Let's take this moment to establish a precedent
First of all, sir, we won't involve you in this
Imagine this debate with all of congress, it's ruinous
I'll reassure the South, 1808 is still the year
That was agreed upon
That buys us time and assuages fear
I'll tell the North that on January 1st
Of that year, we'll ban importation handling the worst
Once I get all this agreed upon, I'll pick up a pen
And introduce a motion never to discuss this again

Hamilton, if we support emancipation
Every single slave owner will demand compensation
And as for slandering Jefferson with talk of mistresses
Do you really wanna-

Do you really wanna have that conversation?

Madison, execute your plan to the letter
Let's hope the next generation thinks of something better