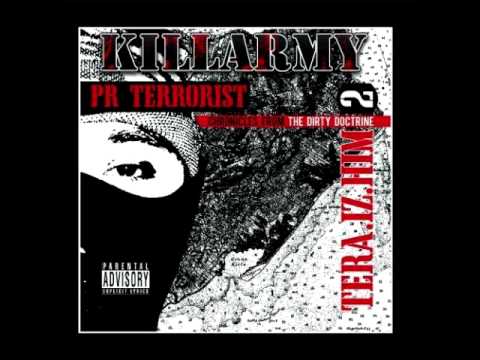 [Intro: P.R. Terrorist]
Yeah, I remember stickin' the fuckin' pizza man
Nigga used to come in the building, we followed him up in the elevator
Knowhatimean? Pull the joint at him, take everything he got on pay day
Run down seven flights wit a box of pizza, eatin' the shit
Cuz niggas was hungry for real (word)
Shit was crazy though, knowhatimean? Staten Island
Stapleton, Park Hill, Stuben

[P.R. Terrorist]
I never had it all, never played basketball
Used to play the, park when it's dark, wit the joint out
Ass and all, acid rain hit the floor, blood stain in project halls
Got my dun in the projects, eatin' Halls
Drinkin' Hemrocks, talk about it, open up his pores
Got his shit cocked, talkin' bout 'the world is yours'
No doubt, I love you kid, you my heart and all
Took that thing for me, back when we was just about to fall
No label deal, no lavish, no diamonds, no carriage
Could of been the average, now new young man in this game, that's established
Got my shittin' order, bitches from coast to coast, plus around the border
Dame that chocha, receive beef and never scorch this
Smoke greens that burn slow like torture
The therapist, now session into the mind of the Terrorist
Yo, aiyo

[P.R. Terrorist]
Y'all niggas know us...
You in the mind of the Terrorist, Dom Pachino, P.R.
The arch nemesis, the best of it, that's my testament
When in the streets, I'm vested, protected
Check it, never naked, full clothed and fully loaded
Leave your chest bloated wit slugs dipped in peroxide
Carbon dioxide, in the penile, I show you how it knocks side
But when the sparks fly, niggas see the darkside
Park your ass in the seat, and take a ride
I like you cuz you dealin' wit pride
Not on some bullshit, let the tool stink, while I lay my shit down in ink
Used to sell pounds that extinct, fill my accounts to the brink
Alone wit my pockets, until they take that ass away to think
For a young man, expand like grams of blow
Keep it gangsta wit the flow and just let these niggas know
Let 'em know, yo, yo, check it, yo

[P.R. Terrorist]
Lord please save me, look what you gave me, since a baby
Many ways to die, only one way to survive, shit's crazy
Plus niggas are shady, try'nna snake me, think it's gravy
The sky is hazy, I light it up when I'm blazed
The joint's on safety, bulletproof Coup, I'm safe
Space cadets scan us, so the dicks can't trace me
Nor replace me wit another, my skin is rubber
I peel it off and let you see what's under, cyborg
Terrorist, half machine, half rhymin' wonder
And when I cometh, you feel the muthafuckin' thunder
You feel it? Yeah you feel that shit, son? Yo, yo