Break Up To Make Up Lyrics

Lyrics to Break Up To Make Up

Break Up To Make Up Video: 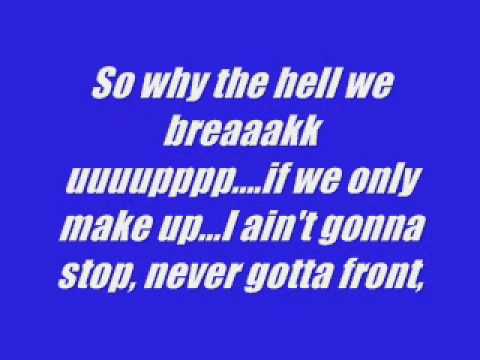 I storm in, she storm out
It's like the "War of the Roses" goin on in my house
It's a little seperation but I know how to fix the situation
Mami just sufferin from love deprevation
So I gotta give her thug reperations
Put it in the life until love leg is shakin
Slow and passionate, 'til we forget what happens
Then we laughin and we back friends

[Interlude: R. Kelly]
You don't have to fuss and fight
Why don't you just spend the night
Baby let's just kiss and hug
You know the words girl let's make up
So much love to be made
Instead of screamin, "Who's to blame?"
Girl I don't wanna.. let you go, I need you so

[Jay-Z]
Girlfriend didn't believe me when I said I'd be back in a little
Cause I had the Chris T on with the crease in the middle
Plus a fresh cut and the freezin icicles
on my wrist, on my hand, that's when shit hit the fan
Said, "You never spend timey, what's up with that?"
Translated it means
[R] Hit it hard from the back
Yeah she hid my car keys
And forced me to fall asleep to her heartbeat

[Jay-Z]
Sex so intense, all that's on my mind
It ain't feel this good since the very first time
I'm pullin her close, she's pullin away
I'm tryin to kiss her mouth but she keeps turnin her face
Cute sex game like our very first date
We ain't know each other well enough, we had to wait
But oh! I know just where your hot spot at
You can not deny that, so do not try that
I do not buy that..