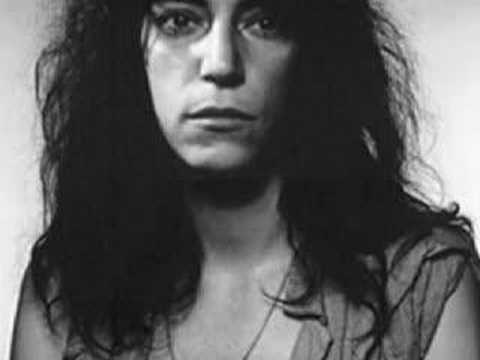 His father died and left him a little farm in New England.
All the long black funeral cars left the scene
And the boy was just standing there alone
Looking at the shiny red tractor
Him and his daddy used to sit inside
And circle the blue fields and grease the night.
It was if someone had spread butter on all the fine points of the stars
'Cause when he looked up they started to slip.
Then he put his head in the crux of his arm
And he started to drift, drift to the belly of a ship,
Let the ship slide open, and he went inside of it
And saw his daddy 'hind the control board streamin' beads of light,
He saw his daddy 'hind the control board,
And he was very different tonight
'Cause he was not human, he was not human.

And then the little boy's face lit up with such naked joy
That the sun burned around his lids and his eyes were like two suns,
White lids, white opals, seeing everything just a little bit too clearly
And he looked around and there was no black ship in sight,
No black funeral cars, nothing except for him the raven
And fell on his knees and looked up and cried out,
?No, daddy, don't leave me here alone,
Take me up, daddy, to the belly of your ship,
Let the ship slide open and I'll go inside of it
Where you're not human, you are not human.?

But nobody heard the boy's cry of alarm.
Nobody there 'cept for the birds around the New England farm
And they gathered in all directions, like roses they scattered
And they were like compass grass coming together into the head of a shaman bouquet
Slit in his nose and all the others went shooting
And he saw the lights of traffic beckoning like the hands of Blake
Grabbing at his cheeks, taking out his neck,
All his limbs, everything was twisted and he said,
?I won't give up, won't give up, don't let me give up,
I won't give up, come here, let me go up fast,
Take me up quick, take me up, up to the belly of a ship
And the ship slides open and I go inside of it where I am not human.?

I am helium raven and this movie is mine,
So he cried out as he stretched the sky,
Pushing it all out like latex cartoon, am I all alone in this generation ?
We'll just be dreaming of animation night and day
And won't let up, won't let up and I see them coming in,
Oh, I couldn't hear them before, but I hear 'em now,
It's a radar scope in all silver and all platinum lights
Moving in like black ships, they were moving in, streams of them,
And he put up his hands and he said, ?It's me, it's me,
I'll give you my eyes, take me up, oh now please take me up,
I'm helium raven waitin' for you, please take me up,
Don't let me here,? the son, the sign, the cross,
Like the shape of a tortured woman, the true shape of a tortured woman,
The mother standing in the doorway letting her sons
No longer presidents but prophets
They're all dreaming they're gonna bear the prophet,
He's gonna run through the fields dreaming in animation
It's all gonna split his skull
It's gonna come out like a black bouquet shining
Like a fist that's gonna shoot them up
Like light, like Mohammed Boxer
Take them up up up up up up
Oh, let's go up, up, take me up, I'll go up,
I'm going up, I'm going up
Take me up, I'm going up, I'll go up there
Go up go up go up go up up up up up up up
Up, up to the belly of a ship.
Let the ship slide open and we'll go inside of it
Where we are not human, we're not human.