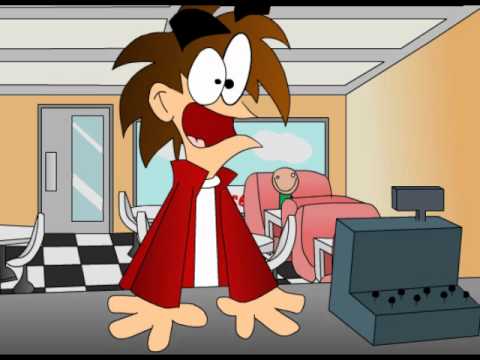 Way back when I was just a little bitty boy living in a box under the stairs in the corner of the basement of the house half a block down the street from Jerry's Bait shop
You know the place
well anyway, back then life was going swell and everything was just peachy


Except, of course, for the undeniable fact that every single morning
My mother would make me a big bowl of sauerkraut for breakfast

I said to my mom
I said "Hey, mom, what's with all the sauerkraut?"
And my dear, sweet mother
She just looked at my like a cow looks at an oncoming train
And she leaned right down next to me
And she said "IT'S GOOD FOR YOU"
And then she tied me to the wall and stuck a funnel in my mouth
And force fed me nothing but sauerkraut until I was twenty six and a half years old

That's when I swore that someday
Someday I would get outta that basement and travel to a magical, far away place
Where the sun is always shining and the air smells like warm root beer
And the towels are oh so fluffy
Where the shriners and the lepers play their ukuleles all day long
And anyone on the street will glady shave your back for a nickel

Well, let me tell you, people, it wasn't long at all before my dream came true
Because the very next day, a local radio station had this contest
To see who could correctly guess the number of molecules in Leonard Nimoy's butt
I was off by three, but I still won the grand prize
That's right, a first class one-way ticket to

Oh yeah
You know, I'd never been on a real airplane before
And I gotta tell ya, it was really great
Except that I had to sit between two large Albanian women with excruciatingly severe body odor
And the little kid in back of me kept throwin' up the whole time
The flight attendants ran out of Dr. Pepper and salted peanuts
And the in-flight movie was Bio-Dome with Pauly Shore
And, oh yeah, three of the airplane engines burned out
And we went into a tailspin and crashed into a hillside
And the plane exploded in a giant fireball and everybody died
Except for me
You know why?

So I crawled from the twisted, burnin' wreckage
I crawled on my hands and knees for three full days
Draggin' along my big leather suitcase and my garment bag
And my tenor saxophone and my twelve-pound bowling ball
And my lucky, lucky autographed glow-in-the-dark snorkel
But finally I arived at the world famous Albuquerque Holiday Inn
Where the towels are oh so fluffy
And you can eat your soup right out of the ashtrays if you wanna
It's OK, they're clean

Well, I checked into my room and I turned down the A/C
And I turned on the SpectraVision
And I'm just about to eat that little chocolate mint on my pillow
That I love so very, very much when suddenly, there's a knock on the door

So, finally I go over and I open the door and just as I suspected
It's some big fat hermaphrodite with a Flock-Of-Seagulls haircut and only one nostril
Oh man, I hate it when I'm right
So anyway, he bursts into my room and he grabs my lucky snorkel
And I'm like "Hey, you can't have that"
"That snorkel's been just like a snorkel to me"
And he's like "Tough"
And I'm like "Give it"
And he's like "Make me"
And I'm like "'Kay"
So I grabbed his leg and he grabbed my esophagus
And I bit off his ear and he chewed off my eyebrows
And I took out his appendix and he gave me a colonic irrigation
Yes indeed, you better believe it
And somehow in the middle of it all, the phone got knocked off the hook
And twenty seconds later, I heard a farmiliar voice
And you know what it said?
I'll tell you what it said

Well, to cut a long story short, he got away with my snorkel
But I made a a solemn vow right then and there that I would not rest
I would not sleep for an instant until the one-nostrilled man was brought to justice
But first, I decided to buy some donuts

So he hands me the box and I open up the lid and the weasels jump out
And they immediately latch onto my face and start bitin' me all over
(rabid gnawing sounds)
Oh man, they were just going nuts
They were tearin' me apart
You know, I think it was just about that time that a little ditty started goin' through my head"
I believe it went a little something like this . . .

I ran out into the street with these flesh-eating weasels all over my face
Wavin' my arms all around and just runnin', runnin', runnin'
Like a constipated weiner dog
And as luck would have it, that's exactly when I ran into the girl of my dreams
Her name was Zelda
She was a caligraphy enthusiast with a slight overbite and hair the color of strained peaches
I'll never forget the first thing she said to me.
She said "Hey, you've got weasels on your face"

That's when I knew it was true love
We were inseperable after that
Aw, we ate together, we bathed together
We even shared the same piece of mint-flavored dental floss
The world was our burrito
So we got married and we bought us a house
And had two beautiful children - Nathaniel and Superfly
Oh, we were so very very very happy, aw yeah

But then one fateful night, Zelda said to me
She said "Sweetie pumpkin? Do you wanna join the Columbia Record Club?"
I said "Woah, hold on now, baby"
"I'm just not ready for that kinda commitment"
So we broke up and I never saw her again
But that's just the way things go

Anyway, things really started lookin' up for me
Because about a week later, I finally achieved my lifelong dream
That's right, I got me a part-time job at The Sizzler
I even made employee of the month after I put that grease fire out with my face
Aw yeah, everybody was pretty jealous of me after that
I was gettin' a lot of attitude

OK, like one time, I was out in the parking lot
Tryin' to remove my excess earwax with a golf pencil
When I see this guy Marty tryin' to carry a big ol' sofa up the stairs all by himself
So I, I say to him, I say "Hey, you want me to help you with that?"
And Marty, he just rolls his eyes and goes
"No, I want you to cut off my arms and legs with a chainsaw"

And then he gets all indignant on me
He's like "Hey man, I was just being sarcastic"
Well, that's just great
How was I supposed to know that?
I'm not a mind reader for cryin' out loud
Besides, now he's got a really cute nickname - Torso-Boy
So what's he complaining about?

Say, that reminds me of another amusing anecdote
This guy comes up to me on the street and says he hasn't had a bit in three days
Well, I knew what he meant
But just to be funny, I took a big bite out of his jugular vein
And he's yellin' and screamin' and bleeding all over
And I'm like "Hey, come on, don'tcha get it?"
But he just keeps rolling around on the sidewalk, bleeding, and screaming
(screaming sounds)
You know, just completely missing the irony of the whole situation
Man, some people just can't take a joke, you know?

Anyway, um, um, where was I?
Kinda lost my train of thought

Uh, well, uh, OK
Anyway I, I know it's kinda been a roundabout way of saying it
But I guess the whole point I'm tryin' to make here is

That's all I'm really tryin' to say
And, by the way, if one day you happen to wake up
And find yourself in an existential quandry
Full of loathing and self-doubt
And wracked with the pain and isolation of your pitiful meaningless existence
At least you can take a small bit of comfort in knowing that
Somewhere out there in this crazy mixed-up universe of ours
There's still a little place called